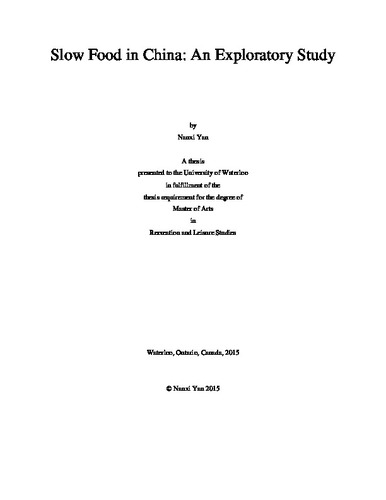 The Slow Food movement, since 1985, has been drawing more and more western people’s attention to ‘good, clean, and fair’ food standards and the preservation of local culture and businesses (Slow Food, 2014). The idea has been introduced to China for over ten years, and the movement has been spread to four big cities in the country. However, there exists very limited research about this movement’s development. To fill in the knowledge gap, this thesis aims to explore how far the Slow Food movement has reached in China by analyzing Chinese Slow Food event attendees, and to provide some practical suggestions for Slow Food event organizers for their future event planning. By distributing self-administrated questionnaires to Chinese Slow Food event attendees in Beijing, China, from September 5th to October 10th, the researcher has collected a total of 221 valid questionnaires. Both univariate and multivariate analysis have been conducted to analyze these quantitative data. Generally speaking, the finding reveals that respondents who came to these events were mainly motivated by the excitement and food of the event. In terms of satisfaction, respondents, as a whole, were fairly satisfied with those events attended by them. The results also indicate that respondents’ socio-demographic characteristics (e.g. gender, marital status and household income), their motivation, and their personal values, their food involvement level, all have affected their degree of satisfaction with Slow Food events. In regard to the acceptance level of the movement, most respondents were highly agreed that the Slow Food movement is important to Chinese people, and it should be known by more people in China. In addition, based on data collected, the researcher has also put forward some practical suggestions for Slow Food event organizers at the end of research.