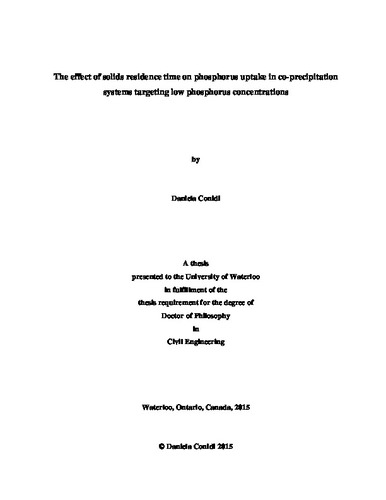 Chemical phosphorus (P) removal is generally considered to be necessary when attempting to achieve ultra low P concentrations (i.e. < 50 μg/L) in wastewater treatment. However, the impact of aging of chemical solids (i.e. hydrous ferric oxides (HFO)) and thereby solids residence times (SRT) typical of conventional wastewater treatment processes on P removal is not well understood. This study characterized the uptake of P in co-precipitation systems under varying influent P concentrations and methods of P addition (i.e. steady state versus transient dosing); identified the impact of SRT on P removal, HFO floc structure, equilibrium adsorption of P to HFO and on the dynamics of P removal under steady state and transient conditions; and described the dynamic behaviour of P sorption onto HFO floc by the development of a model. The study employed lab scale continuous flow sequencing batch reactor (SBR) pilots that received the discharge of a flash mix tank. The pilots were fed with a synthetic natural water and operated over a range of SRTs (i.e. 2.8-26.6 days). Operation at different influent P concentrations and methods of P addition (i.e. steady state vs. transient dosing) was evaluated. Batch sorption testing with solids from the SBRs was also conducted. Under steady state operating conditions the majority of P removal occurred in the flash tank (94% with 3.4 mg influent P/L; 83% with 6.4 mg influent P/L) with an additional smaller fraction of removal in the SBRs (additional 3.3 – 4.8% removal with 3.4 mg influent P/L; 5.5 - 8.8% with 6.4 mg influent P/L). Soluble P uptake was higher at SRTs ≤ 7.4 days with 3.4 mg influent P/L and SRTs ≤ 14.3 days with 6.4 mg influent P/L. The floc morphology (i.e. open vs. compact floc structure) in the flash solids was found to be different from that of the SBR aged solids using SEM analysis. Particle size distributions were found to be the same in all systems supporting the hypothesis that changes in floc morphology were more responsible for differences in P removal than floc size. Batch sorption studies indicated that fresh HFO had a higher sorption capacity in comparison to aged (2.8, 7.4, 10.8 and 22.8 day) HFO. P desorption from HFO solids was found to be negligible supporting chemisorption as the mechanism of P adsorption. P adsorption onto HFO solids was determined to be best described by the Freundlich isotherm. An equilibrium model was found to adequately describe P adsorption onto HFO solids of different ages. Modelling showed that fresh HFO contributed more to P sorption than aged HFO in each SBR implying that the fresh flash solids were more responsible for the observed P uptake in the SBRs in comparison to the aged SBR solids. Transient studies showed that P removal in the SBRs and batch sorption tests was characterized by an initial fast period of removal followed by a period of slower removal until pseudo-equilibrium was reached. A model was developed to describe the dynamic behaviour of P sorption onto three different solid types (i.e. steady state dosed SBR solids, transient dosed SBR solids, and preformed batch solids). Overall, the calibrated model was found to provide a good description of P removal in the SBRs and batch testing. The model was able to reflect the different process conditions (i.e. mixing) in experiments conducted in the SBRs and the batch tests. This was reflected in the estimated values of the rate coefficients obtained from the batch tests and the SBRs. It was found that the same rate coefficient could be used to describe P adsorption onto HFO floc of different ages (i.e. 2.8-26.6 days).