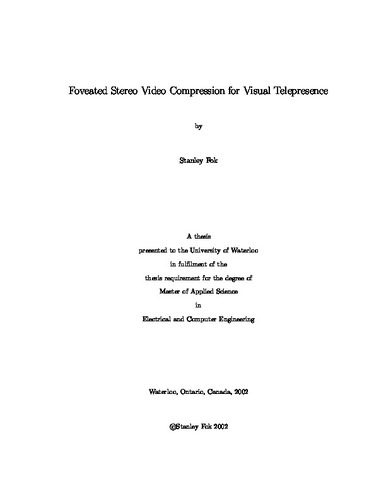 This thesis focuses on the design of a foveated stereo video compression algorithm for visual telepresence applications. In a typical telepresence application, a user at the local site views real-time stereo video recorded and transmitted from a robotic camera platform located at a remote site. The robotic camera platform tracks the user's head motion producing the sensation of being present at the remote site. The design of the stereo video compression algorithm revolved around a fast spatio-temporal block-based motion estimation algorithm, with a foveated SPIHT algorithm used to compress and foveate the independent frames and error residues. Also, the redundancy between the left and right video streams was exploited by disparity compensation. Finally, position feedback from the robotic camera platform was used to perform global motion compensation, increasing the compression performance without raising computation requirements. The algorithm was analysed by introducing the above mentioned components separately. It was found that each component increased the compression rate significantly, producing compressed video with similar compression and quality as MPEG2. The implementation of the algorithm did not meet the real-time requirements on the experiment computers. However, the algorithm does not contain any intrinsic delays. Therefore, given faster processors or optimized software implementation, the design should be able to run in real-time.