Anxiety and attention to threat: The psychometric properties of attentional bias scores 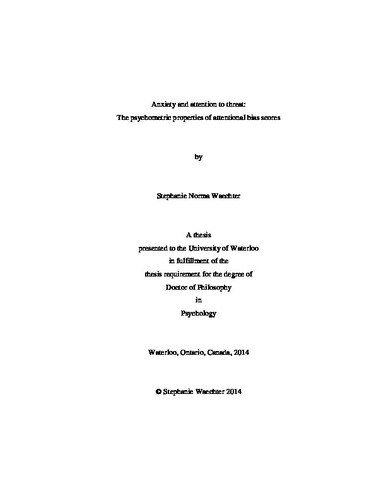 Attentional biases to threat are thought to play a central role in the development and maintenance of anxiety disorders. Various measures have been developed to index these biases; unfortunately, the psychometric properties of many common measures of attentional bias have not been thoroughly evaluated, and the reliability of those that have been evaluated is poor. Three studies assessed the reliability and convergent validity of dot probe and emotional cueing bias scores. Study 1 used a dot probe task and an emotional cueing task that were designed to be as similar as possible to each other (e.g., in terms of display and timing parameters) in an attempt to maximize convergent validity. One hundred fifty-eight participants, selected for high and low levels of trait anxiety, completed the two tasks. The results of Study 1 showed no significant attentional biases to threat, and the psychometric properties of the bias scores were poor. Study 2 investigated the psychometric properties of measures of early attention to threat using another dot probe task and another emotional cueing task. One hundred twelve participants, again selected for high and low levels of trait anxiety, completed the study. The results of Study 2 again showed no significant attentional biases in the high trait anxiety group, and the psychometric properties of the bias scores were poor. To increase the likelihood of producing large and potentially reliable attentional biases, Study 3 replicated the methodology from two classic studies in the literature and also included a state anxiety manipulation. One hundred sixty participants completed an anxious or calm mood induction, which consisted of listening to music while thinking of an anxiety-provoking or calming event in their lives, followed by dot probe and emotional cueing tasks. Reliability estimates for bias scores were low, ranging from 0 to .44. The convergent validity estimates were also low. The anxiety induction did not substantially improve reliability or convergent validity of the bias scores. Overall, the results of these studies improve our understanding of factors that affect the reliability of attentional bias scores. These results also provide some of the first estimates of the reliability and convergent validity of scores from the emotional cueing task. Implications for research and for clinical assessment and intervention are discussed.