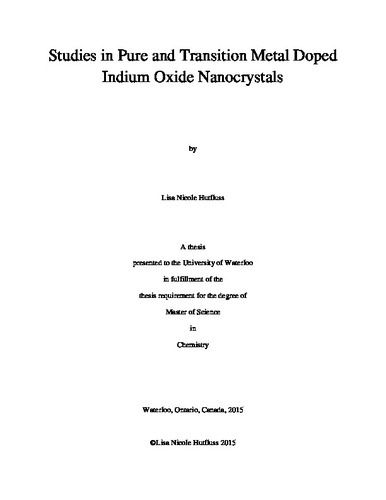 Controlling the crystal structure of transparent metal oxides is essential for tailoring the properties of these polymorphic materials to specific applications. Structural control is usually achieved via solid state phase transformation at high temperature or pressure. The first half of this work is a kinetic study of in situ phase transformation of In2O3 nanocrystals from metastable rhombohedral phase to stable cubic phase during their colloidal synthesis. By examining the phase content as a function of time using the model fitting approach, two distinct coexisting mechanisms are identified ― surface and interface nucleation. It is shown that the mechanism of phase transformation can be controlled systematically through modulation of temperature and precursor to solvent ratio. The increase in both of these parameters leads to gradual change from surface to interface nucleation, which is associated with the increased probability of nanocrystal contact formation in the solution phase. The activation energy for surface nucleation is found to be 144±30 kJ/mol, very similar to that for interface nucleation. In spite of the comparable activation energy, interface nucleation dominates at higher temperatures due to increased nanocrystal interactions. The results of this work demonstrate enhanced control over polymorphic nanocrystal systems, and contribute to further understanding of the kinetic processes at the nanoscale, including nucleation, crystallization, and biomineralization. The ability to further modify the properties of transparent metal oxides through doping of transition metal ions into the host lattice offers a world of possibilities in terms of viable systems and applications. In particular, the use of transition metal dopants to induce room temperature ferromagnetic behaviour in non-magnetic transparent metal oxides is highly desirable for applications such as spintronics. Thus, the second half of this study is concerned with the doping of Fe into nanocrystalline In2O3 via colloidal synthesis and the fundamental characterization of the nanocrystals in anticipation of further development of these materials for potential spintronics applications. Focus is placed on the relationship between the doping concentration, observed phase of the host lattice, and nanocrystal growth and properties. Structural characterizations determine that Fe as a dopant behaves quite unlike previously studied dopants, Cr and Mn, establishing a positive correlation between increasing nanocrystal size and increasing doping concentration; the opposite was observed in the aforementioned previous systems. Through analysis of X-ray absorption near edge structure spectra and the pre-edge feature, it is found that ca. 10% of the assimilated Fe is reduced to Fe2+ during synthesis. Magnetization measurements reveal that these nanocrystals are weakly ferromagnetic at room temperature, suggesting the possibility of an interfacial defect mediated mechanism of magnetic interactions. With increasing doping concentration, the decrease in saturation magnetization suggests a change in the magnetic exchange interaction and a consequential switch from ferromagnetic to antiferromagnetic behaviour. It is clear from this work that colloidal Fe-doped In2O3 nanocrystals are a promising species, prompting further investigation using additional spectroscopic and magneto-optical techniques to increase understanding of the origin of the observed properties. A thorough understanding of this system in conjunction with other transition metal doped transparent conducting oxides will enable enhanced control in the materials design process and effectively allow tailoring of these materials for specific applications, such as spintronics.