Formulation of a Path-Following Joint for Multibody System Dynamics 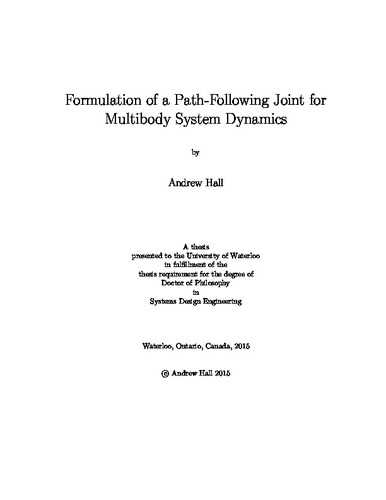 The development and validation of a new multibody joint that constrains a body to follow a spatial path and an orientation defined by a user is presented. The resulting joint has a single degree of freedom (DOF), and maintains equivalent kinematic behaviour when compared to higher-fidelity models. As such, it is referred to as a single-DOF equivalent kinematic (SEK) joint. The primary application of this joint is in the reduction of complex multibody systems, specifically vehicle suspensions. The first formulation of the joint is developed using the user interface of MapleSim. Starting with a planar particle joint, the theory is extended to a full 3D rigid body constraint. At each development stage, the joint is successfully validated against conventional models in both Adams and MapleSim. This formulation of the joint results in the kinematic pair being represented by a system of differential algebraic equations (DAEs) which is not the desired functionality, and so a second formulation is developed. By removing the constraint of using the MapleSim user interface, the formulation can be developed from first principles. Using the path-length as the coordinate for the joint, and the Frenet-Serret equations to compute the motion and reaction spaces, the kinematic pair can be represented by a single ordinary differential equation (ODE). The theory is implemented in the MapleSim source code using the symbolic computing language Maple. The theory of the SEK joint can be extended to create different joints. The first is the compliant SEK joint. In this version of the joint, the body is constrained to move along a spatial path using a simple linear bushing model. The compliant SEK joint is useful for modeling the suspension systems of passenger cars as bushings are used extensively in these systems to increase passenger comfort. The second extension is to add an additional DOF to the SEK joint to created the double-DOF equivalent kinematic (DEK) joint. The DEK joint is useful for modelling steered suspension systems as the steering introduces an additional DOF to the suspension. The envelope of motion for the steered wheel is a surface rather than a spatial line. Once the joints are successfully validated, three example applications of the joint are shown. In the first, rigid, compliant and steered suspension models are developed and compared against high-fidelity models in Adams/Car and MapleSim. Next, a full vehicle model is assembled using the suspension models and compared against an equivalent high-fidelity full vehicle model built in MapleSim. The comparisons show the accuracy of the SEK joint as well as the simulation speed improvements it can offer compared with conventional modelling techniques. The second example, from the domain of biomechanics, shows a knee model created using the SEK joint. Finally, a roller coaster model is created to demonstrate the flexibility of the path generation algorithm to create splines that represent complex paths.