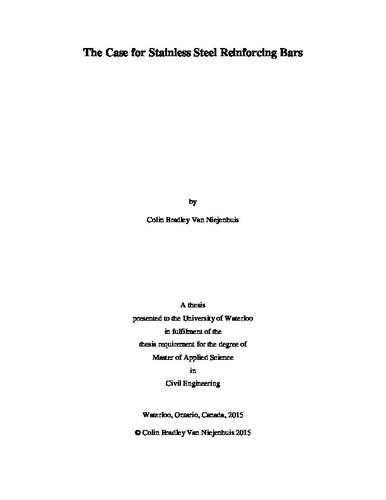 As Canada’s ever expanding transportation network continues to age, the costs associated with rehabilitating and replacing structural elements, such as bridges, continues to grow. This rehabilitation is often required because the structural reinforcing has begun to corrode, producing corrosion product with a larger volume than the initial reinforcing steel, which leads to cracking and de-bonding of the concrete. In the past, most departments of transportation have used low cost, carbon steel. Now, as the Ministry of Transportation of Ontario looks for alternative materials with longer service lives, the use of stainless steel reinforcing bars in critical structural locations has become increasingly financially feasible. Thus, at the request of the Ministry of Transportation of Ontario, an experimental and analytical projected was undertaken to compare the corrosion resistance of six stainless steels and two corrosion resistant reinforcements: S31653, S32205, S32101, S30403, S24100, S32304, MMFX, and galvanized steel with that of the traditional low carbon 400W reinforcement. There are two objective of the project, first to experimentally compare the corrosion resistance of the different reinforcements in both sound and cracked concrete while being exposed to a 21.1% chloride brine, while the second is to create a model for the corrosion-limited service life of reinforced concrete, which includes both sound and cracked concrete. The experimental monitoring included comparing the corrosion resistance of the different reinforcements in: sound (non-cracked) concrete, concrete with a crack transverse to the reinforcement, and concrete with a longitudinal crack above, and parallel to, the reinforcement. After the concrete was cured for 28 days, the cracks were induced, and the sides that did not contain the cracks were coated with epoxy to ensure unidirectional chloride diffusion through the exposed area and the cracked region. The specimens were then monitored by conducting galvanostatic pulse (GP) tests weekly and linear polarization resistance (LPR) tests monthly. The resulting corrosion current density (icorr) and open circuit potentials (Ecorr) values were monitored over a 600 day exposure period. Both the icorr and Ecorr data indicate that the reinforcement in the sound concrete specimens remained passive over this period and, therefore, monitoring will continue until active corrosion initiates. In the longitudinal and transversely cracked concrete, the icorr and Ecorr values indicated that corrosion had initiated in a number of specimens, so all the specimens were removed from their chloride baths, autopsied, inspected, and ranked. The ranking of reinforcement from most resistant to least corrosion resistant is as follows: S32205, S32101, S32304, S30403, S31653, S24100, galvanized, MMFX, and 400W. The corrosion modelling expanded upon two models from the literature, Hartt et al. and Lu et al., by using Fick’s second law to model the ingress of chloride in both sound and cracked concrete. Once the model was created, a Monte Carlo simulation was performed to statistically determine the effects of: crack width, crack density, concrete cover, chloride threshold concentration, surface chloride concentration, and chloride diffusion on the expected life of a concrete structure with both a 100 and 300 year service life. This allowed a critical cost ratio (CCR) to be computed, solely on the value of the reinforcement without taking into account any other owner or social costs. The CCR is defined as how much an owner would be willing to pay for corrosion resistant steel compared with 400W steel over the life of the structure. The results of this analysis can be summarized in three ways. First, this procedure has determined that the parameters that have the greatest effect on the service life of the structure from least to greatest are: surface chloride concentration, crack width and density, chloride diffusion rate of the concrete, and the chloride threshold level of the proposed alternative stainless steel. If the structural designer actively designs to limit the first three parameters, the financial feasibility of corrosion resistant reinforcing dramatically decreased. Second, 15 design curves have been created to help designers quickly assess the financial feasibility of corrosion resistant reinforcement based on the specific requirements of their highway structure. Third, if the design curves suggest corrosion resistant reinforcement is viable, it is recommended that the analysis be re-run for the proposed reinforcement once the chloride threshold for the specific corrosion resistant rebar grade and local surface chloride accumulations have been determined. This will allow the designers to have site specific critical cost ratios, allowing them to determine if the owner or societal costs must be included in the feasibility study. Both the experimental and modelling data strongly suggest that corrosion resistant steel, especially S32205 and S32101, are financially viable replacements for traditional 400W reinforcement, especially in critical structural applications where access or user delay costs prohibit frequent replacement or rehabilitation.