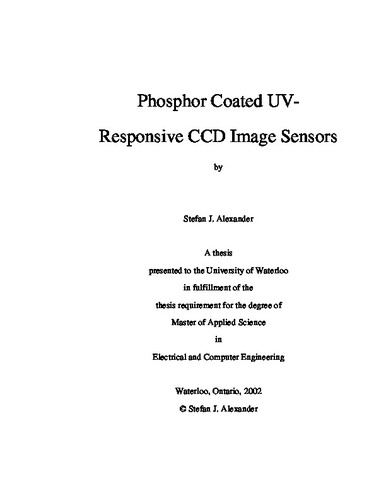 Typical CCD image sensors are not sensitive to Ultra-Violet (UV) radiation, because the UV photons have a penetration depth of 2nm in the ~1&micro;m thick polysilicon gate material. An inorganic phosphor coating was developed previously (by Wendy Franks et al [1, 2]) that was shown to be a viable solution to creating a UV-sensitive CCD image sensor. The coating absorbs incident UV radiation (250nm) and re-emits it in the visible (550-611nm) where it can penetrate the gate material. This coating was deposited using a settle-coat type deposition. Improved coating techniques are presented here. These include a commercial coating from Applied Scintillation Technologies (AST), a Doctor-Blade coating, e-beam deposition, and laser ablation. The properties of the coating, and of the coated sensors are presented here. Tests performed on the sensors include Quantum Efficiency, Photo-Response Non-Uniformity, Contrast Transfer Function, and Lifetime. The AST coating is a viable method for commercial UV-responsive CCD image sensors. The Doctor-Blade coatings show promise, but issues with clustering of the coating need to be resolved before the sensors can be used commercially. E-beam deposition and laser ablation need further research to provide a viable coating.