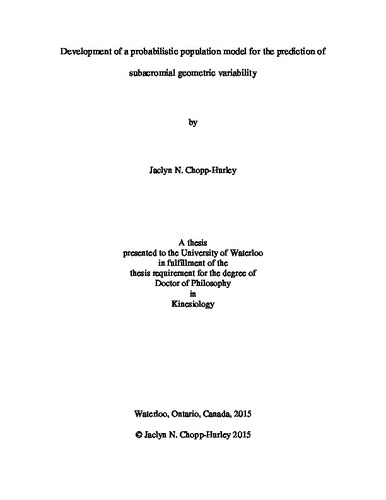 Subacromial impingement syndrome (SAIS) is common in the shoulder and precedes several additional pathologies. SAIS occurs when the tissues interposed between the acromion process of the scapula and superior surface of the humeral head become compressed. Though SAIS is well studied, definitive mechanical cause(s) of impingement still remain elusive due to the multitude of parameters contributing to subacromial space reduction. Within this multifactorial etiology, each exhibits considerable interpersonal variability, and because of this, deterministic approaches to estimate the subacromial space size are unable to assess the distribution of risk in the population. This research used a probabilistic modelling approach to quantify the variability in both morphological and fatigue-related kinematic factors in terms of how they modulate the minimum subacromial space width. Through four distinct symbiotic stages, this work employed a combination of experimental and modelling techniques to develop a novel probabilistic model of subacromial space geometry from which SAIS risk was estimated. The first stage applied probabilistic concepts to an existing deterministic model to evaluate the sensitivity of predicted muscle forces to model parameter variation. This model demonstrated that modest variation of muscle attachment locations and a glenohumeral stability constraint resulted in considerable variability in predicted rotator cuff muscle forces, with differences up to 50% between lower and upper confidence limits. This initial study provided a conceptual framework for the probabilistic subacromial geometry model. The subsequent interdependent experimental studies (Stages II and III) were designed to acquire the necessary kinematic and morphological input distributions for the large-scale probabilistic subacromial geometry model. The first of these studies evaluated the effects of muscle fatigue and arm elevation on shoulder kinematic parameters. Specific quantities measured included: superior/inferior humeral head translation and scapular rotation, tilt and protraction/retraction, as well as the minimum subacromial space width (SAS). While significant superior humeral head translation occurred following fatigue (mean = 0.5 to 4.3mm, 0 to 120° elevation), concurrent compensatory scapular movements appeared to maintain the subacromial space size. However, the fatigue responses and elevation responses were highly variable, with half of the population demonstrating a combination of fatigue-induced changes that reduced the subacromial space. The second study quantified intrinsic static morphological characteristics of the scapula, including: acromial anterior slope, lateral acromial angle, acromial tilt, acromion index and glenoid inclination. Additionally, the interposed subacromial tissue thicknesses, specifically the supraspinatus tendon and subacromial bursa, were measured. Similar to the kinematic outcomes, each of the parameters measured in these studies showed considerable interpersonal variability. However, even the average occupation ratio (65.3 [21.6 – 108.9] %) implied a high risk of tissue compression in elevated arm postures. The distributions of experimentally measured kinematic and morphological characteristics were used as inputs into a three-dimensional probabilistic subacromial geometry model which subsequently generated a distribution of SAS (Stage IV). Additionally, relative importance factors were obtained from the probabilistic modeling approach, which established which parameters (morphological, kinematic) contributed more to the variability in SAIS risk. Overall, the probability of tissue compression (a mechanical indicator of SAIS risk) increased markedly with elevation, from <5% at initial elevation, to ~50% at mid-elevation to 75% at maximal elevation. The considerable variability present in each of the measured characteristics in addition to the modelled output suggested a highly differential risk of fatigue-related SAIS across the population, with glenoid inclination identified as the most important factor in modulating the size of the subacromial space. At the average population level, the predominant recommendation elucidated from this work is avoidance of overhead exertions, which would contribute to rotator cuff tissue damage, facilitated through repetitive tissue compression at elevation angles ≥60°. Additionally, the presence of fatigue-induced superior humeral head translation, despite the maintenance of the subacromial space size, may increase the likelihood of several other degenerative pathologies (glenoid degeneration, osteophyte formation, glenohumeral instability). Thus, rotator cuff strengthening programs, to maintain a stable glenohumeral relationship, are suggested for those exposed to repetitive elevation or upper extremity fatiguing activities, particularly if diagnosed with scapular dyskinesis. Lastly, the outcomes of this research highlight the utility of probabilistic modelling approaches for characterizing interpersonal variability and subsequently estimating the distribution of musculoskeletal injury risk in a population.