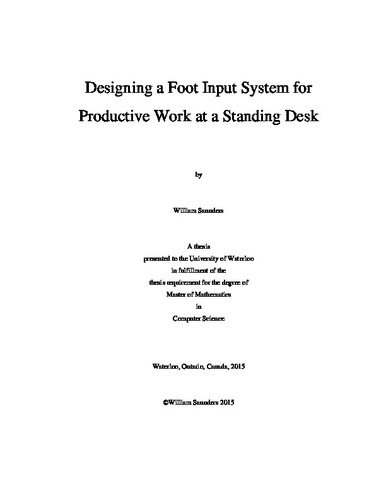 In this thesis we present Tap-Kick-Click, a foot interaction system for controlling common desktop applications. This system enables computer workers to take healthy and productive breaks from using a keyboard and mouse and demonstrates foot interaction techniques which could be applied in other contexts. Our work supplements the existing literature on foot based interaction, as no published work has combined foot input with a standing desk or attempted control of conventional desktop applications. We describe two experiments to investigate questions about the human performance characteristics of foot input relevant to our application which were unanswered in the existing literature. These experiments investigated the effect of target size, direction and distance; the difference between dominant and non-dominant foot; the use of tapping and kicking interaction; and the impact of displaying or hiding a foot cursor. Based on our results we present a set of design guidelines including a suggested minimum target size; a recommendation to ignore foot dominance; and a preference ranking for direction and foot action. These design guidelines informed the design of Tap-Kick-Click, which we describe in detail. It uses a sensing technique using a Microsoft Kinect depth camera and a pair of augmented slippers capable of robustly sensing foot position, kicking and tapping. The primary interaction technique is based on combinations of foot action and directional tapping in a low-density target layout, supported by feedback and instructions presented in an always visible sidebar. This technique is supplemented with a system for selecting elements in a GUI, a high-density target layout for selecting items from a menu, and a help screen. We illustrate the usefulness of Tap-Kick-Click by describing how it can be used to control a web browser, a citation manager and a debugger. Finally, we present the results of a study conducted to evaluate whether new users could learn and use the system in a web browser context. The study demonstrated that users are successfully able to learn and use the system, along with providing areas for improvement.