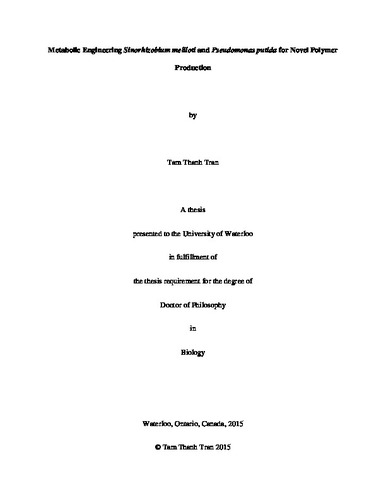 S. meliloti belongs to nitrogen-fixing Rhizobia, the members of the Rhizobiales order of the α-proteobacteria. It can establish a symbiotic relationship with the Leguminosae family of flowering plants. In addition, it is also able to accumulate poly(3-hydroxybutyrate) (P(3HB)) naturally in the presence of excess carbon source. Its genome sequence, specifically genes involving PHB biosynthesis pathway, has been fully annotated and well-defined. In spite of a broad range of its applications in agriculture, its potential applications in industry field have not been paid much attention. We aimed to develop this strain as a robust platform for the production of novel bioplastics which can eventually replace persistent fossil-fuel plastics. Two engineered genes including pct gene encoding propionate CoA transferase and phaC gene encoding PhaC synthase were partially codon-optimized in S. meliloti. Subsequently they were introduced into the strains by either being integrated into the chromosome or being placed on an expression plasmid. The integrant strain which has engineered genes expressed under native promoter is able to produce P(3HB-co-LA) up to 15% dry cell weight (DCW) constituting 30% mol lactic acid (LA). When genes were put in the expression plasmid and expressed under inducible promoter, phenotype complementation was observed in the phaC mutant strain. However, only P(3HB) was able to be produced using this system. We also observed the adverse effect of the induction, or technically the enzyme activity, on polymer production. The more the strains were induced, the more enzyme activity was detected, but the less amount of P(3HB) was produced. S. meliloti is a native short chain length (SCL) polyhydroxyalkanoate (PHA) producer, while P. putida is a native medium chain length (MCL) PHA producer. Unlike S. meliloti which has not been well-studied for non-P(3HB) polymer production, P. putida has been drawn a great deal of attention to be engineered for the production of various types of polymer. Therefore, we would like to discover our plasmid-based system in this strain. The results are very promising since it is the first time the P(LA-co-3HB-co-3HHx-co-3HO) has been discovered to be produced. Promoter engineering is also a critical strategy in metabolic engineering. A range of promoters of different strengths, which have been well-studied, were selected. The results are very interesting because the relative activities have changed in the presence of synthesized genes. The recovery of promoter strengths in the absence of synthesized genes indicated that the promoter strengths depend on genetic contexts. Analysis of the abundance of RNAs was consistent with the enzyme activities given by the gusA reporter gene.