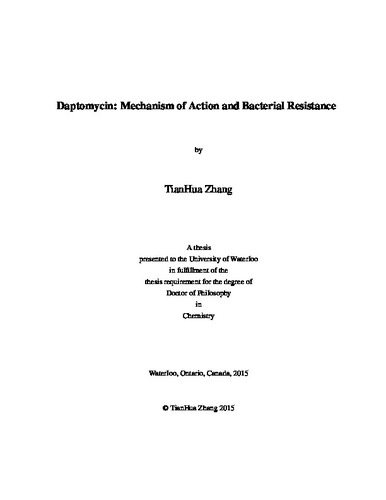 Daptomycin is an important lipopeptide antibiotic used for treating severe infections caused by Gram-positive bacteria, including methicillin-resistant Staphylococcus aureus (MRSA) and vancomycin-resistant Enterococcus species. Its bactericidal activity requires calcium and the presence of phosphatidylglycerol (PG) in the target membrane and correlates with membrane depolarization. Daptomycin has also been shown to form oligomers on target membranes. Based on these findings, it has been proposed that the bactericidal effect of daptomycin arises from the formation of oligomeric pores or channels. This thesis reports experiments that test and further characterize this proposed mode of action. In the first project, reported in chapter 2, it is demonstrated that oligomer formation is necessary for the bactericidal effect. The semisynthetic lipopeptide CB-182,462, which is similar to daptomycin in terms of structure and activity, was mixed with daptomycin. Fluorescence energy transfer studies showed that this mixture indeed produces stable hybrid oligomers, but at the same time, it was found that the mixture produces a significantly less than additive antibacterial effect. The existence of functionally impaired oligomers indicates that oligomer formation is indeed important for antibacterial function. However, it also shows that oligomerization is not sufficient; once formed, the oligomers must take another step in order to acquire antibacterial activity. The assumption that daptomycin forms channels or pores in the target membranes is based on the observation that it induces bacterial cell membrane depolarization. However, these channels or pores have not been shown in a simple membrane model system. In the second project, a liposome model was used to detect and characterize the permeability properties of the daptomycin pores. These pores are selective for cations and allow for a higher permeating rate for smaller ions. Among all the tested cations, Na+ and K+ have the highest permeation rate, which suggests the in vivo depolarization is mainly due to sodium influx. Genetic studies have indicated that an increased content of cardiolipin in the bacterial membrane may contribute to bacterial resistance against the drug. In the third project, it was shown that daptomycin no longer forms pores, even though it could still form oligomers, when 10 or 20 molar % cardiolipin were included in otherwise susceptible liposomal membranes. The oligomers formed on cardiolipin-containing membranes had approximately half the number of subunits (n 4) of their pore-forming counterparts, and they were confined to the outer leaflets of the membranes. These findings not only reaffirm the suggestion raised in the first project that oligomerization is not quite enough, but also lead to a more detailed model: daptomycin first formes tetramers on the outer leaflet before being translocated to the inner leaflet, then two tetramers on the opposite leaflets align to create an octameric pore. Cardiolipin may mediate resistance to daptomycin by preventing its membrane translocation and subsequent permeabilization.