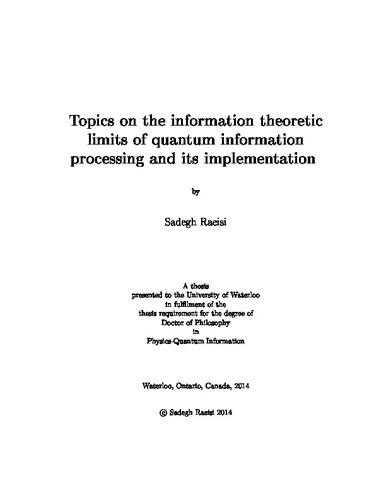 Recent advances in quantum technologies enabled us to make large quantum states and pushed towards examining quantum theory at the macroscopic level. However observation of quantum e ects at a macroscopic level still remains a demanding task. In this thesis we try to address one of the challenges and propose and explore some new solutions. One of the obstacles for observation of macroscopic quantum e ects is the sensitivity to the measurement resolution. For many di erent cases, it has been observed that the precision requirement for measuring quantum e ects increases with the system size. We formalize this as a conjecture that for observation of macroscopic quantum e ects, either the outcome precision or the control precision of the measurements has to increase with system size. This indicates that the complexity of macroscopic quantum measurement increases with the system size and sheds some lights on the quantum-to-classical transition at the macroscopic level. We also introduce a technique to go around the sensitivity problem for observation of micro-macro entanglement. We propose that using a unitary deampli cation process, one can bring the system back to the microscopic level where the measurements are less demanding and quantum e ects are easier to verify. As the unitary processes do not change the entanglement, this serves as a veri cation tool for micro-macro entanglement. We also explored the connection between quantum e ects and thermodynamics of macroscopic quantum systems for two speci c cases. For one, we investigated the e ect of entanglement in composite bosons and Bose-Einstein condensation. We showed that as the state of the composite boson approaches a maximally entangled state, the condensation rate also approaches one. The other case we considered was heat-bath algorithmic cooling. We found the cooling limit of this class of thermodynamic transformations and showed that it decreases exponentially with the number of qubits. We also developed an entropic version of Mermin's inequality. Here the idea is to develop a tool to reveal the entanglement in many-body quantum systems based on the entropy of the measurement outcomes. We introduce a new inequality that holds for locally realistic models, yet can be violated with quantum measurements. One of the nice features of this inequality is that it can be violated maximally with quantum measurements. This resembles the GHZ paradox but for entropies of the measurement outcomes.