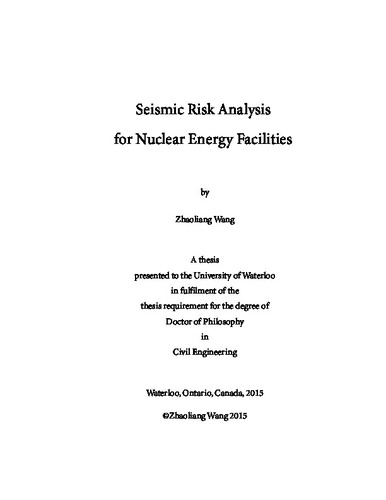 Earthquakes are destructive natural disasters that can inflict various levels of damage on engineering structures and lead to other adverse consequences. Accurate seismic risk quantification of critical engineering structures such as nuclear power plants is of great importance, not only for answering public safety concern but also for facilitating risk-informed decision making. Seismic Probabilistic Risk Analysis (SPRA) has been widely used for seismic analysis and design of critical engineering structures. It combines the probabilistic model of the behavior of structural response given a ground-motion parameter (GMP) value (e.g., seismic fragility model) and the Probabilistic Seismic Hazard Analysis (PSHA) for the GMP in a mathematically rigorous manner. However, there are a number of issues on the engineering application of SPRA that need to be addressed before it can be readily implemented into current engineering practice. In current SPRA practice, both the fragility model and PSHA are based on a single GMP, which is adequate for the single-mode-dominant structures. For multiple-mode-dominant structures, whose response could be better predicted using multiple GMP,a vector-valued SPRA is conceptually more appropriate. However, vector-valued SPRA requires extensive computational efforts and extensive consultation of vector-valued PSHA from seismologists,which prevent it from being ready for engineering purposes. The objective of this study is to bridge the gaps between seismological analyses and engineering applications, i.e., to address the immediate issues in current vector-valued SPRA so that it can be readily applied into engineering practice. A new seismic hazard deaggregation procedure is developed for seismic risk analysis, which determines a set of controlling earthquakes that induce dominant hazard to the site of interest. A simplified approach to vector-valued SPRA is developed based on the controlling earthquakes. Integration over all possible earthquake occurrences in standard vector-valued SPRA is then avoided,which substantially improves the computational efficiency without losing accuracy. This overcomes the deficiencies and preserves the advantages of standard vector-valued SPRA. To facilitate performing the simplified approach, factors affecting the accuracy of the simplified approach are discussed and illustrated through the numerical examples. In addition, seismic capacity evaluation of nuclear facilities is an important task in a SPRA. However, following the current evaluation procedures, inconsistency in seismic capacity estimates are often obtained for the same facility in similar plants at different locations. The inconsistency also shows dependency on the GMP selected for defining seismic capacity. This inconsistency is conceptually undesirable for engineering purposes. To characterize the possible factors affecting the consistency in seismic capacity estimates, a comprehensive parametric study is performed in an analytical manner. Theoretical derivations and graphical illustrations are resorted to facilitate the analysis. Both general and case-by-case analyses are performed to show how each of these factors affects the consistency in seismic capacity estimates. This parametric study represents a wide coverage of seismic capacity evaluating problems for nuclear facilities, and hence can be used for interpreting results of similar kinds in current engineering practice.