Assessment of Nitrate Export in Agricultural Sub-Catchments of the Grand River Watershed: An Isotope Approach 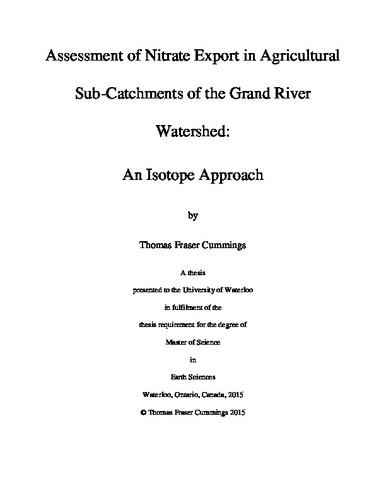 Nitrate (NO3-) is one of the most widespread contaminants in freshwater systems globally. This is largely due to high fertilizer application rates that are required to maximize crop yield. Elevated NO3- concentrations can cause detrimental health effects to both humans and aquatic ecosystems. While the drinking water standard for NO3- in Canada is 10 mg N/L, this level is often surpassed in small headwater agricultural streams and tile drainage. Inorganic (synthetic) and organic (manure) fertilizers are the greatest non-point sources of NO3- to freshwater and groundwater systems in Canada. Inherent isotope fractionation during production of inorganic and organic fertilizers allows these N sources to be differentiated using the isotopic ratios of nitrogen and oxygen. Small agricultural catchments play an important role in nutrient export to larger freshwater systems, however the source and timing of export is often unknown. The main objective of this thesis is to better understand the sources and processes governing NO3- concentration and export in four small agricultural catchments where large changes in nutrient concentration can occur over the course of a year. Land-use within these catchments is predominantly agriculture (>77%). Geochemical and isotopic analysis of the four creeks, the Conestogo River, the Grand River as well as tile drain and shallow groundwater piezometers located along one creek (Boomer Creek) was undertaken. NO3- concentration varied seasonally, concomitantly with stream discharge, with increased concentrations and export occurring during the non-growing season at scales from small watershed to the Grand River. Peak concentrations (>10 mg N/L) occurred in late fall and early winter and lowest concentrations (<5mg N/L) occurred during the summer months. Median NO3- concentrations from tile drains (5.9 mg N/L) were much higher than that of groundwater samples (0.1 mg N/L). Further, groundwater NO3- concentrations remained consistently low even at times of high discharge and high NO3- concentrations in both the tiles and the creek, indicating that the creek is more influenced by water discharging from tile drains and not that of groundwater. The studied creeks NO3- export varied seasonally with the greatest export occurring in all creeks during spring melt on both a per day basis and over the duration of the melt compared to other seasons. Summer low flow NO3- concentrations in the Conestogo River is a function of the NO3- concentration within the Conestogo Reservoir. Annual precipitation amounts as well as reservoir residence time are believed to be the largest factors governing reservoir NO3- concentrations and thus summer Conestogo River NO3- concentrations. δ15N and δ18O analysis of NO3- was used to examine NO3- sources as well as seasonal changes in N-cycling processes. Both δ15N and δ18O were lower (+ 6 to + 8‰ and - 2 to + 1‰) in the fall and winter months with higher values (> + 10‰ and > + 4‰) during the summer for all creeks with the exception of the δ18O of Swan Creek. Increased isotopic values occurred at lower NO3- concentrations and concomitant increases in both 18O and 15N in an expected ratio (approx. 1:2) providing strong evidence of the occurrence of denitrification. Annual fluctuations in concentrations of N2O and CH4 are also consistent with active denitrification. δ15N-NO3- values corrected for the isotopic effects caused by denitrification were consistent with that of values reported for manure (+ 8‰). Despite the δ15N being within that of manure, the source of NO3- to these watersheds is inconclusive as a result several NO3- sources also falling within the same range. Isotopic analysis suggests that Boomer Creek stream water is similar to water discharging from tile drains along Boomer Creek. NO3- concentration and isotope data from tile drains and Boomer Creek indicate a strong influence from tile drains on annual stream NO3- concentration and export. The influence of tile drains will only become greater as 30 million meters of new tiles are installed annually in Ontario. Understanding nutrient dynamics in small watersheds is vital to understanding and predicting water quality in larger surface water systems. This study re-emphasises the fact that understanding the seasonality in annual NO3- export requires knowledge of the N sources and processes that govern N transformation. Only with this knowledge can effective best management practices be implemented to successfully maintain surface and ground water quality.