Spaceborne monitoring of Arctic lake ice in a changing climate 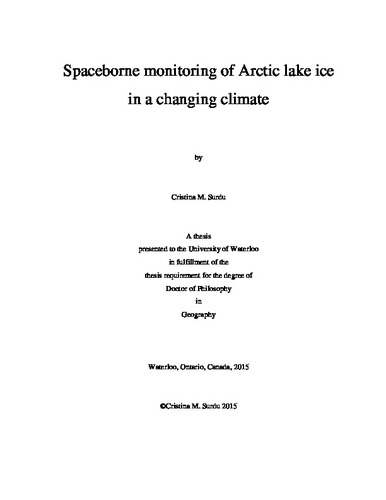 Lake ice phenology (timing of ice-on and ice-off) and thickness are changing in response to generally warmer climate conditions at high northern latitudes observed during recent decades. Monitoring changes in the lake ice cover provides valuable evidence in assessing climate variability in the Arctic. To enhance our understanding of the role of lake ice in the Arctic cryosphere and to evaluate the extent to which Arctic lakes have been impacted by the contemporary changing climate, development of a lake ice monitoring system at pan-Arctic scale is needed. While large lakes across the Arctic are currently being monitored through satellite observations, there are extremely sparse and mostly non-existent records tracking the changes in small high-latitude lakes. Employing a combination of spaceborne observations from synthetic aperture radar (SAR) and optical sensors, and simulations from the Canadian Lake Ice Model (CLIMo), this researched aimed to investigate changes in winter ice growth and ice phenology of lakes across the Arctic, focus being given to smaller lakes on the North Slope of Alaska (NSA) and lakes of various sizes in the Canadian Arctic Archipelago (CAA). To determine the changes in the fraction of lakes that freeze to bed (grounded ice) in late winter on the NSA from 1991 to 2011, a time series of ERS-1/2 was analysed. Results show a trend toward increasing floating ice fractions from 1991 to 2011, with the greatest change occurring in April, when the grounded ice fraction declined by 22% (α = 0.01). This finding is in good agreement with the decrease in ice thickness simulated with CLIMo, a lower fraction of lakes frozen to the bed corresponding to a thinner ice cover. Model simulations over the same period as SAR acquisitions (1991-2011) indicate a trend toward thinner ice covers by 18-22 cm (no-snow and 53% snow depth scenarios, α = 0.01). The results emphasize the regime shifts that these lakes are currently undergoing, including shorter ice seasons. The longer-term trends (1950-2011) derived from model simulations show a decrease in the ice cover duration by ~ 24 days consequent to later freeze-up dates by 5.9 days (α = 0.1) and earlier break-up dates by 17.7-18.6 days (α = 0.001). The temporal evolution of backscatter (σ0) from two C-band SAR sensors – Advanced Synthetic Aperture Radar (ASAR) Wide Swath and RADARSAT-2 ScanSAR Wide Swath – was then used to investigate the potential of high temporal-frequency SAR for determining lake ice phenological events (e.g. freeze onset, melt onset and water-clear-of-ice). Results show that combined SAR observations are generally suitable for detection of important lake ice events timing. However, the wide range of incidence angles and to a certain extent the orbit differences between the observations, the wind effect, particularly during fall freeze-up, the low differences in σ0 during transition from a grounded-ice cover to melt onset of ice in early spring, complicate the detection of lake ice phenological events. In order to order to document the response of ice cover of lakes in the Canadian High Arctic to climate conditions during recent years, a 15-year time series (1997-2011) of RADARSAT-1/2 ScanSAR Wide Swath, ASAR Wide Swath and Landsat acquisitions were analyzed. Results show that earlier melt onset occurred earlier for all 11 polar-desert and polar-oasis lakes that were investigated. With the exception of Lower Murray Lake, all lakes experienced earlier ice-minimum and water-clear-of-ice dates, with greater changes being observed for polar-oasis lakes (9-23.6 days earlier water-clear-of-ice for lakes located in polar oases and 1.6-20 days earlier water-clear-of-ice for polar-desert lakes). Additionally, results suggest that some lakes may be transitioning from a perennial to a seasonal ice regime, with only a few lakes maintaining a perennial ice cover on occasional years. Aside Lake Hazen and Murray Lakes that preserved their ice cover during the summer of 2009, no residual ice was observed on any of the other lakes from 2007 to 2011. This research provides the foundation of a lake-ice monitoring network that can be built on with the newly launched and future SAR and multispectral missions. Additionally, this study shows that in response to warmer climate conditions, Arctic lakes are experiencing regime shifts with overall shorter ice seasons, thinner ice covers, fewer lakes that freeze to the bottom and more lakes that lose the perennial ice cover and experience a seasonal ice regime.