Delving Deeper: The Relationship between Culture, Leisure, and Wellbeing 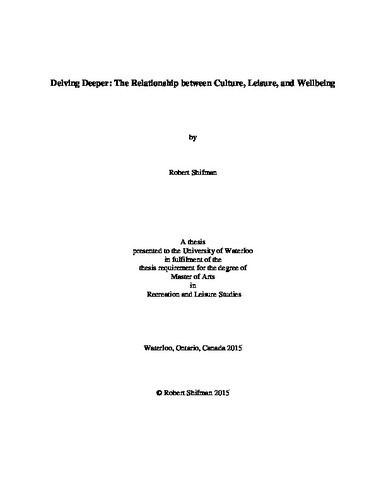 Leisure has been consistently linked to wellbeing for its many potential benefits for over a decade. While a variety of links have been established between leisure and wellbeing, researchers have seldom investigated the role culture plays in this relationship, especially as cultural diversity continues to grow in North America. Self-construal theory is one perspective that is believed to provide insight into how culture affects one’s leisure choices. In order to investigate the relationships between culture, leisure, and wellbeing, this study compared Canadian and Chinese international students and the role that self-construal might play. A sample of 556 students enrolled in the Faculty of Mathematics at the University of Waterloo was drawn and a self-administered questionnaire completed, which included measures of all key concepts. Findings were consistent with previous studies in that leisure motivation, participation, satisfaction were each important contributors to subjective wellbeing. Cultural variations in leisure were noted; however, membership in a specific cultural group did not significantly contribute to wellbeing. The two forms of self-construal (i.e., independent and interdependent) were also not significantly related to wellbeing, which was inconsistent with the expectations of the theory. Findings were mixed overall in terms of both supporting and disagreeing with the theory of self-construal and its role in the relationship between leisure and wellbeing. These inconsistencies were exemplified by a positive relationship between independent and interdependent self-construal and no differences being noted across the culture groups, suggesting that the two types are not as culturally-aligned as theorized. This study recommends that future research should further study how to best conceptualize and measure self-construal reliably. The extent to which international students are incorporating their new cultural environment into their lives remains unclear; in other words, to what extent have international students in this sample already become somewhat acculturated? Therefore, it is recommended that future research should conduct a comparison of students from two different cultural samples (e.g., Canada and China).