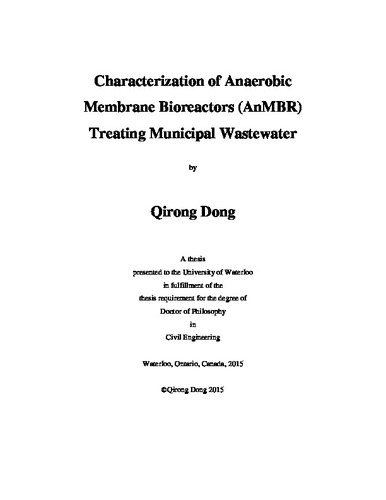 The study investigated the impact of solids retention time (SRT), hydraulic retention time (HRT) and the addition of FeCl3 on bioprocess and membrane performance of anaerobic membrane bioreactor (AnMBR) treating authentic municipal wastewater. The impact of SRT (40~100 days) and HRT (8.5~12.5 hours) on bioprocess performance was assessed using one pilot and one bench scale AnMBRs. The results revealed superior permeate quality with respect to concentrations of chemical oxygen demand (COD) (<40mg/L) and 5-day biochemical oxygen demand (BOD5) (<10mg/L) can be achieved in all tests. SRT and HRT did not significantly influence on the COD and BOD5 removal efficiencies. Extended SRTs had reduced sludge production and enhanced methane production. Oversaturation of dissolved methane in permeate was assumed to be responsible for a consistent lack of mass balance closure in all tests. After calibration of biokinetic coefficients, PetWin 4 (EnviroSim Canada) was found to effectively simulate particulate COD, readily biodegradable COD and acetic acid concentrations over a range of SRTs and HRTs. The long term membrane performance was evaluated when pilot AnMBR operated with varied SRT (100~40 days) and recovery cleaning. The results revealed reduced SRTs had reduced the fouling propensity of mixed liquor characteristic in terms of TSS concentration and dewaterability as indicated by colloidal COD (cCOD) concentration and capillary suction time (CST). The effect of these parameters corresponded to the short term fouling (i.e. cake accumulation) that was tested by critical flux tests. The recovery cleaning obtained efficient fouling resistance removal on both pilot plant operation and clean water flux tests. However, the long-term fouling rate was observed significantly higher on cleaned membrane than virgin membrane and appeared to be higher after each recovery cleaning regardless the varied mixed liquor characteristics. The mitigated membrane fouling with virgin membrane suggested initial membrane condition might contributed to the lack of consistency between mixed liquor and fouling as the membrane properties might be modified by residual foulants. The study on long-term (90 days) impact of dosing FeCl3 on the bioprocess performance and membrane performance was evaluated in the pilot AnMBR fed with non-Fe dosed sewage and fed with 26.0 mgFeCl3/L to the sewage.The results showed the addition FeCl3 enhanced the treatment performance of the pilot AnMBR regarding to the removal efficiencies of COD and BOD5, but did not generate significant influence on the removal efficiencies of total Kjeldahl nitrogen(TKN) and total phosphorus(TP) and the methane yield. The membrane performance was significantly improved by dosing FeCl3 which demonstrated by irreversible fouling lower than 5kPa and no reversible fouling for the first 75 days. The superior membrane performance can be correlated to the shift of particle size distribution to the particulate fraction and the reduced colloidal and soluble substances in the sludge, especially the soluble protein, carbohydrate, Ca and S. The confocal laser scanning microscopy (CLSM) tests showed with the addition of FeCl3 a thicker foulant layer was developed and the deposition of protein and carbohydrate on the membrane surface was significantly prevented. Therefore a more porous foulant layer was formed and prevented the development of strongly-attached cake layer and pore blocking. The recovery cleaning study indicated FeCl3 dosing enhanced the efficiency of current recovery cleaning protocol and the foulants formed in the Fe-dosed sludge was more of inorganic origin, as 75% of the foulant resistance was removed by citric acid. The superior membrane performance during the operation combined with enhanced cleaning efficiency by FeCl3 dosing would significantly improve the sustainability of AnMBR in municipal wastewater treatment. A transient study was conducted at pilot scale to assess the impact of Fe dosage on the dynamics of biological and membrane performance of the AnMBR. A transient model of the AnMBR system was employed to assist with interpretation of the measured responses in the mixed liquor under different FeCl3 dosages. A high dosage (43mg/L) of FeCl3 resulted in a significant accumulation of fixed suspended solids (FSS) and volatile suspended solids (VSS) and reduction of colloidal COD in the mixed liquor. The elevated dosages appeared to reduce the biodegradability of VSS that was present in the raw wastewater. Intermediate dosages of FeCl3 (21-12 mg/L), had less effect on these responses and did not appear to affect VSS biodegradation. Membrane performance was significantly affected by FeCl3 dosage as indicated by reversible and irreversible resistances. Reversible resistance was closely related to the colloidal COD in the mixed liquor, thus responded quickly to Fe dosage. Irreversible resistance had a delayed response to changes in the colloidal COD concentrations in the mixed liquor and this was attributed to the effect of slow mass transfer of colloidal matter between the mixed liquor and the membrane.