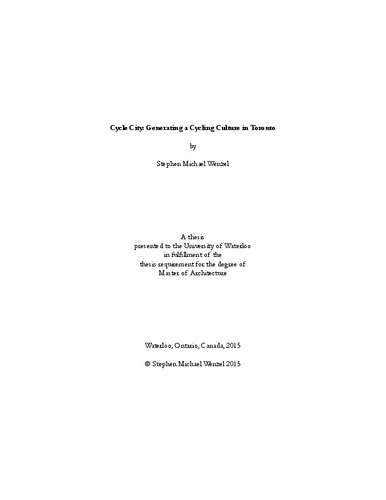 As Toronto’s population continues to grow, the city is faced with many new challenges related to the quality of urban life. Central to overcoming these challenges is a rethinking of urban mobility. As the region’s population grows, city streets have become ever more congested, and commute times have increased exponentially. The city and the region’s governments have called for an end to sprawling development and initiated a policy of densification. This new paradigm allows the bicycle to play a key role in making Toronto a better place in which to live and travel, assisting in overcoming the limitations of the current automotive-dominated transportation network. Often, the Toronto cyclist feels like an outsider, wrestling for space amongst the automobiles. In order for cycling to have a major influence on the quality of life in the city, a cycling culture must become much more prevalent amongst Torontonians. This culture can only be achieved through a redefinition of the cycling experience, transforming bicycling into the most efficient and exciting mode of transportation within the city. How can Toronto build upon the cycling support, which has developed in the downtown core, to make cycling a fundamental part of the transportation network throughout the city? As illustrated in the attempted implementation of Toronto’s 2001 bike plan, a uniform strategy for cycle promotion across all reaches of the city is ineffective in generating the support necessary to instigate significant infrastructural and behavioural change. In contrast, this thesis seeks to understand cycling patterns and preferences in Toronto and to use this information to target the design of strategically selected cycling projects. The role of design is explored as a catalyst for behavioural change and the rise of a cycling culture. A new cycling corridor is proposed, linking the forthcoming Eglinton cycle track with the downtown core, making cycling much more accessible for midtown Toronto residents. This corridor seeks to combine infrastructure and amenities, creating new programmatic pairings which elevate the image of cycling within the city. The route acts as a catalyst for the growth of a cycling culture and expansion of the city-wide cycling network.