Galt Agora: Vision for a Pedestrian Fabric in the City of Cambridge 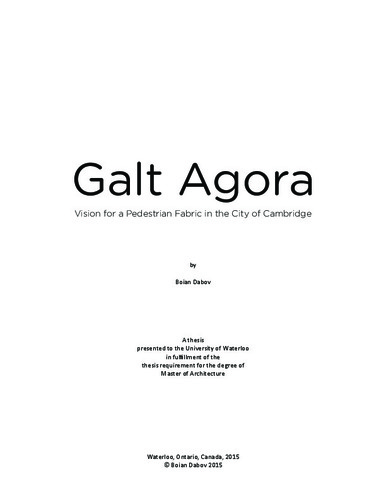 The ongoing urban renewal occurring within the City of Cambridge, and its Galt city centre has been a long delayed process, yet it is a necessary one for the city and its inhabitants. A latent sense of disintegration within the cultural identity of the city can be observed, as a result of architecture and urban infrastructure that subverts the relationship between people and the public realm. The existing urban design has been dominated by fragmented community relationships, propagated by our now unavoidable dependence on automobiles. As the city grows in population, the design of resolutely public spaces will be crucial for development of effective interactions between individuals living as part of a community. This thesis will investigate 9 potential sites for future public environments within the existing network of underutilized city owned parking lots and other unexploited public sites. It proposes a critical evaluation of current parking functions as legacy urban infrastructure, and the addition of socially, culturally, and economically productive public space, or public infrastructure. A hybrid public architecture will result as a synthesis of the unavoidable need for parking (urban infrastructure) and the currently un-addressed need for successful pedestrian environments (public infrastructure). The speculative interventions will ultimately benefit the city of Cambridge, as it engages in the creation of urban architecture designed to support democratic social interactions amongst the local community. Using the archetype of the Greek agora and stoa, this thesis will create a language for a hybrid public architecture as a basis for defining a series of new productive public spaces. The vision for this thesis will seek to supplement or replace underutilized public parking lots and other public spaces relevant to the identity of the city, with informal public spaces and supportive market structures, all meant to attract and sustain pedestrian activity and exchanges. Influenced by theories of absolute architecture (Pier Vittorio Aureli), spaces of appearance (Hannah Arendt), studies on sensory driven nature of animal interaction (Edward T. Hall), and various precedent studies on the design and function of public spaces and supportive markets, this thesis will speculate on the ability of a future pedestrian fabric to support future growth in the city. A hybrid public architecture will present these future public environments as places for harmonious political and economic relationships between the diverse citizens of Cambridge.