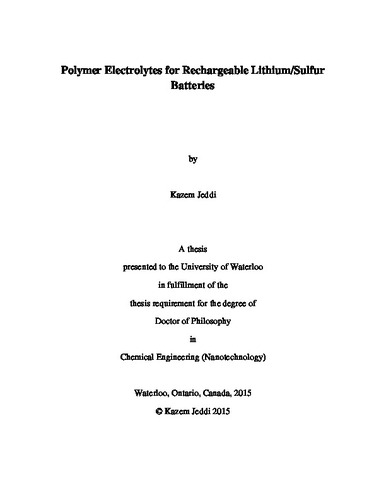 The lithium/sulfur (Li/S) battery is one of the most promising candidates for energy storage systems due to sulfur’s high theoretical specific capacity at 1672 mAh g-1. This capacity is an order of magnitude higher than that of conventional electrodes and gives packaged Li/S cells an energy density of 400–600 W h kg-1, which is two or three times higher than that of current lithium-ion batteries. In addition, low cost, abundance and environmental friendliness of sulfur offer the opportunity to produce cheap, safe and commercializable high-energy density batteries. Despite these advantages, the practical application of Li/S batteries is still prevented by modest practical capacity, short cycle life and low Coulombic efficiency. These problems are mainly due to:(i) low electronic conductivity of sulfur, which leads to low sulfur utilization; (ii) generation of various forms of soluble intermediate lithium polysulfides during the electrochemical reactions, which dissolve in the electrolyte and induce the so-called shuttle effect causing irreversible loss of sulfur active material over repeat cycles; (iii) volume change of sulfur upon cycling, which leads to its mechanical rupture and, consequently, rapid degradation of the electrochemical performance. Since the early development of Li/S batteries by Abraham and Peled in the 1980s, a large number of studies have been done to understand the electrochemical mechanism of the Li/S cell and overcome its drawbacks. Studies have focused on increasing the electronic conductivity of sulfur by encapsulating sulfur with conducting materials such as porous carbon or conductive polymers, and suppressing polysulfide dissolution into the liquid electrolyte by coating with conductive polymers and oxides. It should be pointed out that most of the research efforts to improve the performance of Li/S batteries have focused on the cathode electrode. From the electrolyte perspective, the use of conventional liquid electrolytes deteriorates battery performance due to polysulfide dissolution and their shuttle between cathode and anode that leads to fast capacity degradation and low Coulombic efficiency. Moreover, the use of these liquid electrolytes raises safety concerns since they are prone to leakage and safety hazard. The motivation for this PhD work is to search for better electrolyte systems for Li/S batteries. We aim to study the effect of these electrolytes on the performance of Li/S batteries in conjunction with designed cathode materials using sulfur/conductive polymer and sulfur/carbon composites. In the first part of the thesis, we introduce gel polymer electrolytes (GPEs) into Li/S batteries with sulfur–polyacrylonitrile (S/PAN) composite cathodes. GPEs, consisting of solid matrices and embedded liquid electrolytes, may generally be defined as a polymer membrane that possesses ionic transport properties comparable to that of liquid electrolytes. In particular, for Li/S batteries, it is expected that the polymer membrane can act as a physical barrier, which can help control the dissolution of the polysulfide anions from the cathode and also prevent their migration to the anode. Specifically, the GPE was formed by trapping solutions of lithium hexafluorophosphate (LiPF6) in ethylene carbonate electrolyte in a poly(vinylidene fluoride-co-hexafluoropropylene) (PVdF-HFP)-based polymer matrix. However, these Li/GPE/S cells suffer from performance fade after a few cycles due to the inability to retain liquid electrolyte in the GPE. A wide variety of methods were studied in order to improve the stability of the GPE and the performance of Li/S cells, including incorporation of layered nanoparticles, synthesis and addition of functionalized polymers and synthesis and addition of mesoporous nanoparticles. It was observed that incorporation of organically modified nanoparticles (OMMT) or functional polymer bearing inorganic domains reduces the pore size and improves the uniformity of pore size in the PVdF-HFP membrane, which prevents the release of electrolyte solution during cycling and suppresses the dissolution of polysulfides. The Li/S cell with the PVdF-HFP/OMMT nanocomposite electrolyte delivered an initial capacity of 1622 mAh g−1 and maintained a capacity of 500 mAh g−1 after 300 cycles. When the PVdF-HFP/functionalized PMMA electrolyte was used, the Li/S battery had an initial discharge capacity of 1600 mAh g-1 and a stable capacity of 1050 mAh g-1 after more than 100 cycles. Furthermore, utilization of the PVdF-HFP/functionalized PMMA/mesoporous silica composite electrolyte resulted in an initial discharge capacity of 1648 mAh g-1 and a stable discharge capacity of 1143 mAh g-1 after more than 100 cycles. The preparation procedures employed have the advantage of being reproducible, simple and inexpensive. In the second part of the thesis, gel polymer electrolyte systems were prepared and tested in Li/S batteries with sulfur/carbon (S/C) composite cathodes. Sulfur/carbon (S/C) composite cathodes are of great interest since they potentially offer higher loading of sulfur (>60 wt%). However, severe capacity fading and low cycling efficiency due to lithium polyslfide dissolution and diffusion result in poor cyclability. Therefore, it is difficult to find a suitable electrolyte for this category of sulfur-based composite cathodes. The high-energy and low-cost S/C composite cathode was synthesized through a facile one-step solution processing method, in which activated hardwood charcoal (AHC) powder was used as a scaffold to embed the sulfur active material and improve its electronic conductivity and its utilization in the battery cell. Results showed that normal gel polymer electrolytes could not effectively prevent polysulfide dissolution and performance fading. However, when a fluorinated liquid electrolyte containing1,1,2,2-tetrafluoroethyl-2,2,3,3-tetrafluoropropyl ether was employed, a significant improvement in the electrochemical performance of the Li/S cell was achieved. It was observed that such a low-cost Li/S cell can be operated for more than 300 cycles while still maintaining high specific capacity (600 mAh g-1) and 97% Coulombic efficiency. Further analyses confirmed that such an enhanced performance was due to the confinement of lithium polysulfides inside the cathode electrode that prevented their shuttling between cathode and anode. This minimized the severe active mass loss that leads to fast capacity degradation and low Coulombic efficiency. The electrochemical performance of this new Li/S battery configuration represents a significant improvement in comparison to that of conventional electrolytes under the same testing conditions.