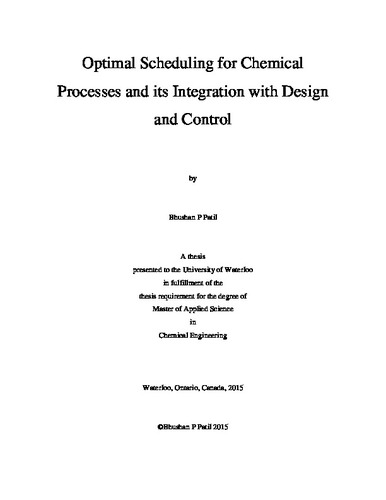 Optimal scheduling is an active area of research as the economics of many chemical processes is affected to a great extent with the optimality of schedules of their operations. Effective use of resources and their capacities is paramount in order to achieve optimal operations. Manual and heuristics-based approaches used for scheduling have their limitations which inhibit the chemical process industries to achieve economically attractive operations. One such sector is the analytical services industries and success of companies in this sector highly relies on the effective scheduling of operations as large numbers of samples from customers are received, analyzed and reports are generated for each sample. Therefore, it is extremely important to efficiently use all the various resources (labor and machine) for such facilities to remain competitive. This study focuses on the development of an algorithm to schedule operations in an actual large scale analytical services plant using models based on multi-commodity flow (MCF) and integer linear programming (IP) techniques. The proposed scheduling algorithm aims to minimize the total turnaround time of the operations subject to capacity, resource and flow constraints. The basic working principles of the optimization-based algorithm are illustrated with a small representative case study, while its relevance and significance is demonstrated through another case study of a real large scale plant. In the latter case study, the algorithm’s results are compared against historical data and results obtained by simulating the current policy implemented in the real plant, i.e., first-come first-served. Along with scheduling, many chemical processes require the optimization of other aspects that play major part in the process economics, e.g. design and control. An important section of the chemical process industry produces various grades of products (multi-product) and the scheduling of the production of these grades along with optimal design and control play important roles in the economy of the operations. As part of this research study, a new methodology that can address three aspects of the economy of the multiproduct processes together; i.e. simultaneous scheduling, design and control, has been developed. A mixed integer non linear programming (MINLP) optimization framework has been formulated, which aims to simultaneously evaluate optimal design, steady state operating conditions for each grade as a part of design, optimal tuning parameters for the controllers, optimal sequence of production of various grades of product and optimal smooth transitions between the grades. This is achieved via minimization of overall cost of the operation. The proposed methodology takes into account the influence of disturbances in the system by the identification of the critical frequency from the disturbances, which is used to quantify the worst-case variability in the controlled variables via frequency response analysis. The uncertainty in the demands of products has also been addressed by creating critical demand scenarios with different probabilities of occurrence, while the nominal stability of the system has been ensured. Two case studies have been developed as applications of the methodology. The first case study focuses on the comparison of classical semi-sequential approach against the simultaneous methodology developed in this work, while the second case study demonstrates the capability of the methodology in application to a large-scale nonlinear system.