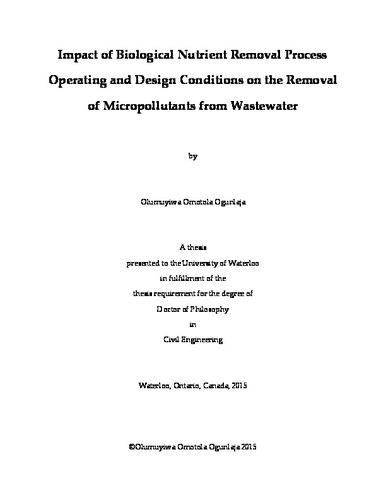 The efficacy of three different wastewater treatment configurations, conventional activated sludge (CAS), nitrifying activated sludge (NAS) and biological nutrient removal (BNR) for removal of selected micropollutants from authentic wastewater was investigated. The processes were also characterized based on their proficiency to reduce the estrogenic activity of the influent wastewater using the in-vitro recombinant yeast assay. The selected micropollutants (MPs) covered a broad spectrum of therapeutic classes, i.e non-prescription analgesic (Ibuprofen (IBU)), anti-convulsant/epileptic (meprobamate (MEP) and carbamazepine (CBZ), lipid lowering drug (Gemfibrozil (GEM)), antibiotic (trimethoprim (TMP) and sulfamethoxazole (SMX)), steroid hormone (androstenedione (ADR)), estrogen (estrone (E1)) and estrogenic compounds (nonyl phenol (NP) and bisphenol A (BPA)). The removal efficiency of TMP improved with the complexity of the three treatment process configurations. IBU, ADR, SMX, NP, E1 and BPA had moderate to high removals (> 65%) while CBZ and MEP remained recalcitrant in the three treatment process configurations. The removal of GEM was better in the NAS than in BNR and CAS treatment configurations. The YES assay analyses showed an improvement in estrogenicity removal in the BNR and NAS treatment configurations as compared to the CAS treatment configuration. Comparing the estrogenic responses from the three treatment configurations, the removal efficiencies followed the order of BNR = NAS > CAS and all were greater than 81%. The removal of estrogenicity in a University of Cape Town- biological nutrient removal (UCT-BNR) wastewater treatment processes was investigated using pilot and bench scale systems, batch experiments and mathematical modeling. In the pilot BNR process, 96 ± 5% of the estrogenicity exerted by the EDCs in the wastewater was removed by the treatment process. The degradation efficiencies in the anaerobic, anoxic and aerobic zones of the pilot BNR bioreactor were 11± 9%, 18 ± 2% and 93 ± 10% respectively. In order to further understand the performance of the BNR process in the removal of EDCs from wastewater, a bench scale BNR process was operated with synthetic wastewater dosed with E1 and E2. The removal of estrogenicity in the bench scale system (95 ± 5%) was comparable to the pilot BNR process and the degradation efficiencies were estimated to be 8± 0.8%, 38 ± 4% and 85 ± 22% in the anaerobic, anoxic and aerobic zones. A biotransformation model developed to predict the fate of E1 and E2 in batch tests using the sludge from the BNR process was calibrated using the data from the experiments. The biotransformation rate constants for the transformation of E2 to E1 were estimated as 71 ± 1.5, 31 ± 3.3 and 1 ± 0.9 L.gCOD-1d-1 for the aerobic, anoxic and anaerobic batch tests respectively while the corresponding biotransformation rate constants for the transformation of E1 were estimated to be 7.3 ± 1.0, 3 ± 2.0, and 0.85 ± 0.6 L.gCOD-1d-1. A steady state mass balance model formulated to describe the interactions between E2 and E1 in BNR activated sludge reasonably described the fate of E1 and E2 in the BNR process. A combination of pilot scale biological nutrient removal (BNR) process, batch experiments and modeling exercises were employed to investigate the removal and biotransformation of trimethoprim (TMP) in a BNR activated sludge. The concentrations of the active microbial groups- ammonia oxidizing bacteria (AOB), ordinary heterotrophic organism (OHO) and polyphosphate accumulating organism (PAO) in the BNR bioreactor were estimated to be 40, 780 and 2710 g COD/m3 respectively. TMP was biotransformed in all the redox zones of the BNR bioreactor. The TMP biotransformation efficiencies in the anaerobic, anoxic and aerobic sections were 13 ± 12%, 17 ± 10% and 24 ± 4% respectively. Batch tests with and without nitrification inhibition showed that AOB played a role in the biotransformation of TMP in BNR activated sludge. A pseudo first order model that incorporated the contributions of PAO, OHO and AOB to the overall biodegradation of TMP was found to describe the biodegradation of TMP in batch tests with and without nitrification inhibition. The estimated biotransformation rate constant with respect to PAO, OHO and AOB were 0.32 ± 0.06, 0.58 ± 0.06 and 13.7 ± 0.06 L/gCOD/d respectively. This model showed that PAOs, OHOs and AOBs contributed towards the biotransformation of TMP in BNR activated sludge with the trend AOBs = PAOs > OHOs.