Characterizing Spatial and Temporal Variations in Nutrient and CO2 Dynamics Within and Across Peatlands in the Western Boreal Plain, Canada 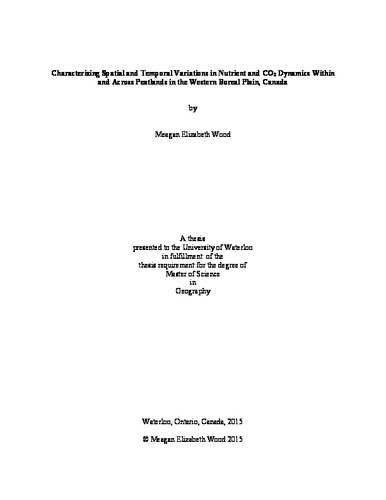 Peatlands are found extensively throughout the Western Boreal Plain, a region under pressure due to persistent drought conditions and industrial development (especially oil and gas, and oil sands development). Our ability to predict peatland responses to these stressors is hampered by a lack of scientific understanding of natural biogeochemical processes, such as nutrient and CO2 dynamics in peatlands in this region, and, the drivers of these processes. An understanding of the natural spatial and temporal variation in nutrient and carbon dynamics within and among peatland systems and the interactions between the two is needed. This information can then be used to develop successful reclamation and best management practices during oil industry related development. This thesis is comprising two studies characterizing nutrient dynamics within the Athabasca Oil Sands region (AOS) of Alberta. The first study simultaneously examined and compared nutrient (nitrogen, N and phosphorus, P) dynamics (extractable pools, net transformation (mineralization) rates and supply rates) and rates of terrestrial CO2 exchange within a poor fen (JACOS) throughout the growing season of 2012 to characterize seasonal patterns in nutrient and carbon dynamics and determine if relationships existed between these. A second objective of the first study was to determine if a semi-permanent road constructed across the fen that obstructed the natural flow of groundwater, impacted nutrient and CO2 exchange processes The second study focused on the peak growing season and compared nutrient dynamics between the JACOS site and four additional peatlands that fell along an apparent hydrologic and minerotrophic gradient. Results suggest that both nutrient dynamics and CO2 exchange varied temporally throughout the season with maximum transformation/exchange rates (net mineralization, NEE) in peak summer (June, July) as a consequence of warm temperatures, and reduced rates of biogeochemical exchange during the cooler shoulder seasons. Direct statistical relationships between carbon and nutrient dynamics were not apparent in the data set, although N and CO2 exchange processes appeared to be generally affected by similar environmental drivers, although the specific drivers of individual N, and CO2 exchange processes were variable. For example, C exchange processes in JACOS were driven by a combination of temperature, photosynthetically-active radiation (PAR) and moisture. In contrast, N availability appeared to be driven largely by external supply and to a lesser extent, internal mineralization that was driven primarily by temperature. In contrast, P appeared to be a function of hydrologic (and apparent redox) conditions within this site. Although, the road had significant impacts on moisture and water table depths, this did not result in substantial impacts to either N or CO2 dynamics within this fen, likely because the moisture differences on either side of the road were not significant enough to lead to a biogeochemical response. Collectively, these results demonstrate that different types of natural (seasonal, climatic) and anthropogenic stresses impact biogeochemical processes in different ways in this landscape. Findings from the second study determined that nutrient (N and P) content in the WBP does not follow a geochemical gradient. The drivers of N and P across the five sites were similar to those found at JACOS, where N was largely driven by external supply and P was driven by redox conditions. In general, nutrient content was comparable across different peatland types with the exception of JACOS, where on-site contamination most likely resulted in greater nitrate and P content. Biogeochemical cycles in the WBP are complex. Our studies determined that there is not one single driver that controls N, P and CO2 dynamics within this landscape, and demonstrates that variable hydrology affects biogeochemical cycles in different ways. This finding complicates recommendations for reclamation projects as managers may be forced to optimize for a given biogeochemical cycle. In the WBP, nutrient dynamics did not appear to vary along a hydrologic gradient, suggesting that the moisture thresholds required to affect nutrient cycles are greater than what has been shown for carbon.

Wood Meagan (2015). Characterizing Spatial and Temporal Variations in Nutrient and CO2 Dynamics Within and Across Peatlands in the Western Boreal Plain, Canada. UWSpace. http://hdl.handle.net/10012/9167