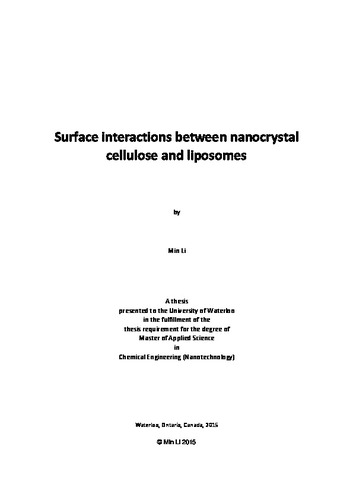 Cellulose nanocrystal (CNC)，which is produced from acid hydrolysis of native cellulose fibers, is a nanoparticle with exceptional strength and physicochemical characteristics. It is renewable, biodegradable, non-toxic and environmentally friendly. Due to its advantages, many chemical modifications on the surface of CNC were performed for different applications, for example, enzyme immobilization, catalyst, antimicrobial medical applications and drug delivery. In order to design a good drug delivery system, the most important thing is to figure out the surface interaction between different systems. This thesis is focused on the modification of CNC and the surface interactions between two types of CNC (cationic and anionic CNC) and three varieties of liposomes. The cationic CNC used in this study is glycidylltrimethylammonium chloride (GTMAC) grafted CNC, while the anionic CNCs are pristine CNC and TEMPO CNC respectively. Liposomes are composed of phospholipids bilayers in concentric layers, similar to the microspheres of cell membrane. It has many advantages as a drug carrier, such as extending the efficacy, reducing drug toxicity, improving curative effect and avoiding tolerance. The three types of liposomes used are DOPC=, DOTAP and DOPG. The liposomes were mixed with CNCs and their interactions were examined and elucidated. In this thesis, the adsorption between CNC and liposomes has been proven in certain conditions. CNC has no damage to the membrane of the liposomes. In addition, the interactions between this system have been confirmed as electrostatic interactions due to effect of salt. However, one big problem is that the size of the complex is quite hard to control.