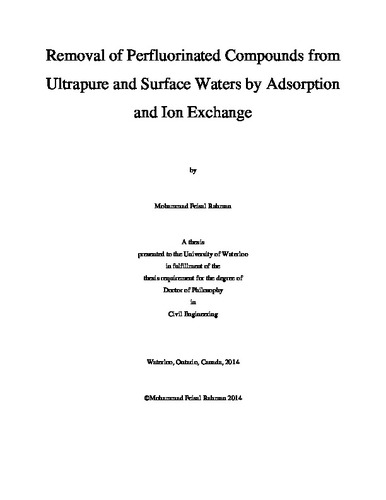 Perfluorinated compounds (PFCs) have been detected globally in drinking water at trace concentrations. This is attributable to the chemical properties that characterize these compounds: strong saturated carbon-fluorine bonds which make them resistant to chemical, physical, and biological degradation. Manufacturing wastes, sewage treatment plants, and leaching from consumer products are the primary pathways by which PFCs enter the environment. Drinking water occurrence studies indicate that PFCs, if present in source water, can pass through drinking water treatment processes and be present in finished drinking water. While they are currently not regulated, several PFCs have been included in the USEPA’s 3rd unregulated contaminant monitoring list. As yet there is no clear understanding of the fate of PFCs during drinking water treatment. Full-scale surveys and bench-scale studies indicate that activated carbon adsorption and ion exchange treatment may be effective. Elucidation of the fate of selected PFCs at environmentally relevant concentrations during granular activated carbon (GAC) and ion exchange treatment was the primary objective of this research. A gas chromatography/mass spectrometry (GC/MS)-based analytical method employing electron impact ionization was developed to analyze perfluorinated carboxylic acids (PFCAs), the selected target class of PFCs. Solid phase extraction was used to concentrate samples, and the PFCAs were derivatized using butanol in the presence of sulfuric acid and heat. The method detection limits for PFCAs with six to nine carbons were 16 ng/L-30 ng/L in ultrapure water and 16 ng/L-49 ng/L in Grand River water (GRW). Three PFCAs were selected as targets for adsorption studies: perfluoroheptanoic acid (PFHpA), perfluorooctanoic acid (PFOA) and perfluorononanoic acid (PFNA). Adsorption behaviour of the target PFCAs in ultrapure water was assessed using four GACs, two anion exchange resins, and two alternative adsorbents. Single solute isotherms show that macroporous polystyrenic A-500P® (A-500P) ion exchange resin has a higher equilibrium capacity compared to the coal-based Filtrasorb® (F-400) GAC or the macroporous polyacrylic A-860® (A-860) ion exchange resin. During time dependent PFCA removal experiments at a target initial PFCA concentration of 3 µg/L, A-500P resin achieved the highest removal of the target PFCAs at equilibrium (> 95%) followed by the F-400 GAC (92% at equilibrium). This was followed by coconut shell-based AquaCarb CX 1230® (CX) GAC and the two wood-based GACs – Norit C-Gran® (C-Gran) and NuChar WV B-30® (B-30). The A-860 resin achieved 66%-80% removal of the target PFCAs. BET surface area was not a good indicator of comparative PFCA removal performance, although pore size distribution, surface charge and particle size appeared to play a role. The alternative sorbents – cattle bone-based Fija Fluor® and a dairy manure-based Biochar – could not substantially remove the target PFCAs, potentially attributable to low micropore content and a predominantly mesoporous structure. Kinetics with the anion exchange resins were substantially faster compared to the GACs and the alternative sorbents, with A-500P as the fastest resin. Direct competition among the PFCAs for sorption sites was observed only on the A-860 resin. Further, chain length-dependent removal trends were not observed with the F-400 or CX GACs or the A-500P resin. Based on kinetics data in ultrapure water the GACs CX and F-400, the ion exchange resins-A500P and A860, and the alternative adsorbent Biochar were selected for further evaluation in surface water using GRW. As with ultrapure water, the A-500P resin achieved the fastest and highest removal of the target PFCAs in GRW (~ 95%); however, the A-860 resin failed to achieve any substantial removal. Among the carbonaceous adsorbents, F-400 better removed the target PFCAs than CX and the Biochar. The presence of natural organic material (NOM) and inorganic anions in GRW lowered the equilibrium PFCA sorption amounts by 90 to 99% compared to those in ultrapure water. The humic fraction of NOM was the dominant competitor for the GACs and Biochar; however, both NOM and inorganic anions, especially sulfate, exerted competition on the anion exchange resins. Low removal of NOM with Biochar indicate that Biochar may not be used as an NOM pretreatment while high removal of NOM with ion exchange resins indicated that the tested resins may be effective as a pretreatment for GAC adsorbers. Overall, this research demonstrates that GAC adsorption and strong base ion exchange can be promising PFCA removal techniques for drinking water. However, such premises should not be generalized as surface water matrix, adsorbent properties and PFCA characteristics may affect their removal.