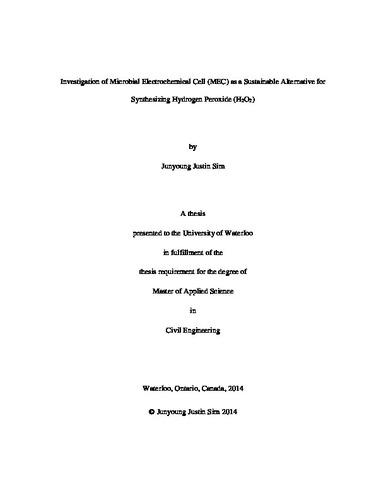 Hydrogen peroxide (H2O2) is an environmentally-safe strong oxidant that has many practical applications. While H2O2 is capable of oxidizing a variety of contaminants, its end products are only H2O and O2. As a result, the world-wide demand for H2O2 is growing significantly. To meet the high demand, H2O2 is exclusively manufactured through the anthraquinone oxidation (AO) process due to its ability to produce highly concentrated H2O2. However, the AO process requires high energy consumption and additional costs (transportation, storage, and handling), and the search for a more sustainable H2O2 production method is on-going. Microbial electrochemical cell (MEC) has shown its potential as an alternative sustainable method for H2O2 production. MEC is an emerging biotechnology that can produce H2O2 from wastewater by marrying microbial metabolism with oxygen reduction reaction (ORR) in electrochemical cells. Although a few past studies demonstrated H2O2 production in lab-scale MECs, they only presented a proof-of-concept. Therefore, this study was carried out to assess the feasibility of the MECs for H2O2 production with the objectives to (1) establish the optimal operation conditions for H2O2 production, (2) to evaluate H2O2 production and wastewater treatment in a lab-scale MEC under different operating conditions (feed and hydraulic residence time), and (3) to investigate the feasibility of H2O2 production in a pilot-scale MEC. Preliminary experiments were conducted to establish the optimal operating conditions for the cathode of MECs. In the experiments, H2O2 production was compared for cathode materials (the graphite cathode vs the carbon gas diffusion cathode) and aeration methods (active aeration vs passive aeration) within a range of the Ecathode. In the experiment, the carbon gas diffusion cathode resulted in higher H2O2 production than the graphite cathode when the active aeration was implemented for the cathode, although O2 reduction to H2O was dominant over O2 reduction to H2O2 at all Ecathode. However, O2 reduction to H2O2 improved significantly at all Ecathode when passive air diffusion was employed for the carbon gas diffusion cathode. Therefore, it was determined that H2O2-producing MEC should be equipped with the carbon gas diffusion cathode and the passive aeration for the cathode for the optimal H2O2 production. In the following experiments, a lab-scale MEC was operated on two feeds (acetate-fed MEC vs wastewater-fed MEC) under various hydraulic residence times (HRTs). Both acetate-MEC and wastewater-MEC showed efficient degradation of organics in each feed; the acetate-fed MEC achieved the COD removal efficiency of 45 ± 2 to 94 ± 2 % for a range of HRTs from 2 to 24 hrs when the wastewater-fed MEC achieved the COD removal efficiency of 39 ± 7 to 64 ± 5 % for a range of HRT from 2 to 10 hrs. However, a significant amount of the COD removed in the acetate-fed MEC was converted to current while most of the organics in the wastewater-fed MEC was converted to electron sinks, such as methane. As a result, higher current density and H2O2 production was observed in the acetate-MEC. The highest current density of 8 ± 0.56 A/m2 and the highest cumulative H2O2 concentration of 843.50 ± 17.30 mg/L at 6 hr of cathode operation were achieved in the acetate-fed MEC. However, the highest current density of 0.56 ± 0.05 A/m2 was observed in the wastewater-fed MEC, resulting in a cumulative H2O2 concentration of 147.73 ± 1.98 mg/L at 24 hr of cathode operation. Finally, a pilot-scale MEC was operated on acetate synthetic wastewater with a different ion exchange membrane (AEM-MEC vs CEM-MEC). The current density in the pilot-scale MEC was 0.94 A/m2 in the AEM-MEC and 0.96 A/m2 in the CEM-MEC. As a result of low current densities in the pilot-scale MEC, low H2O2 production was observed; a cumulative H2O2 concentration was 9.0 ± 0.38 mg/L in the 20-day operation of the AEM-MEC and 98.48 ± 1.6 mg/L in the 16-day operation of the CEM-MEC. Also, low H2O2 conversion efficiency of 0.35 ± 0.05 and 7.2 ± 0.09 % in the AEM-MEC and CEM-MEC, respectively was observed due to high pH in the cathode and low H2O2 production rate. In addition, technical and design challenges were identified in the pilot-scale MEC: membrane expansion, CO2 trapping due to the absence of an outlet, and positioning of carbon gas diffusion cathode. These challenged had an adverse effect on the performance of the pilot system. These results highlight that the future research is required to improve current generation and H2O2 production in large-scale MECs while coping with the identified challenges.