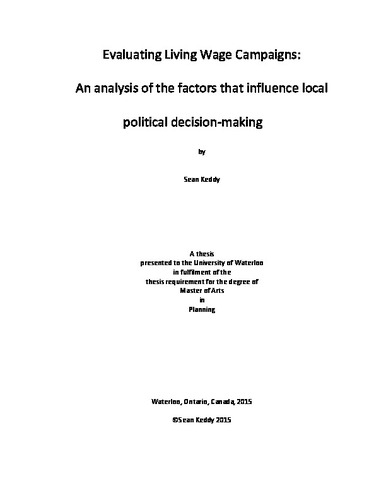 With the rise in the proportion of low wage employment over the last few decades, poverty and the need for affordable housing has become a pressing issue for many cities. Living wages are one tool that can alleviate these pressures however; campaigns to implement a municipal living wage policy have met with limited success. This thesis explores the factors that influence the success or failure of living wage campaigns in Canadian cities. Through the use of in-depth interviews with key informants, this study analyzes and defines multiple factors that are important to a successful campaign. The key informants were selected from a pool of stakeholders and decision-makers from two case study cities; New Westminster, BC and Kingston, ON. The campaign in New Westminster, BC resulted in the successful implementation of a living wage policy while the Kingston, ON campaign is currently ongoing. These two living wage campaigns and their respective cities are compared and contrasted with one another in an effort to determine the most pertinent factors for their success or failure. The key informants include individuals and organizations that were active participants in their respective campaigns and the city councillors that ultimately decide on whether or not to implement a living wage policy. The factors that were identified in the interviews have been further classified into four distinct themes: the living wage calculation, campaign structure and networks, political factors, and urban socio-economic context. By understanding the key factors that are influential to a campaign’s success in the Canadian context, insight can be gained on the best way to structure any future campaigns in an effort to optimize their chances of success.