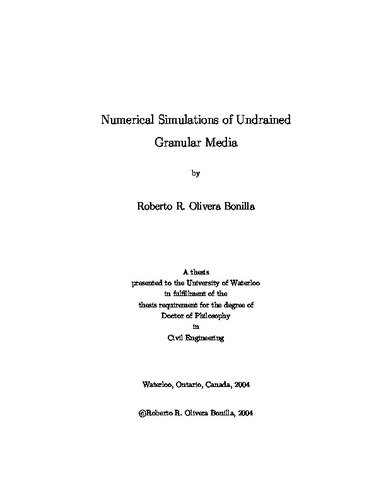 The objective of the present study was to develop a fluid flow-coupled distinct element model capable of capturing the undrained behaviour of granular soils by considering fundamental physical mechanisms that involve fluid flow and particle interaction. The method considers granular media as assemblies of ellipsoidal particles arranged on a plane and interacting by means of contact forces. Saturation effects are incorporated by assuming that particles are immersed in fluid, the flow of which is simulated as occurring through a network of conduits. The flow through conduits is according to a Hagen-Poiseuille relation; a transient solution is obtained by solving a system of differential equations. The developed fluid-flow coupled distinct element was used to conduct various numerical simulations and the mechanisms of undrained deformations were examined from a micromechanical point of view. The dissertation begins with a literature review on the undrained behaviour of granular materials as observed in laboratory experiments. A review of previous attempts to simulate undrained tests micromechanically is also presented, and the advantages and disadvantages of various methods are examined. The capability of the developed model to simulate two-dimensional fluid-flow and pressure dissipation problems is demonstrated by means of comparisons with analytical solutions. Fluid pressure dissipation problems are qualitatively compared with Terzaghi's one-dimension theory of consolidation. It is shown that transient flow problems are accurately modelled by the fluid flow network approach. Simulated compression tests were carried out to examine the effects of different confining pressures and initial densities on the macroscopic response. The results compare favorably with those commonly observed in undrained laboratory experiments. Simulated tests are analyzed from a micromechanical point of view. It is shown that macroscopic behaviour can be traced to changes in micromechanical fabric descriptors. The effects of the interparticle friction angle on the undrained behaviour of the assemblies are investigated. The undrained strength is considerably increased by increasing interparticle friction. The main mechanism found to be responsible for the development of higher strength is the tendency of the specimens to dilate during shear distortion. The effects of the principal stress direction on the macroscopic response are examined. The behaviour of initially anisotropic samples is significantly altered by the direction of the principal stresses relative to the anisotropy direction. It is demonstrated that macroscopic permeability of the media has a considerable effect on the strength. This behaviour is attributed to the inhomogeneity of pore pressure distributions which increases with decreased permeability. The results presented are generally in agreement with observations previously reported from laboratory experiments. The possible applications of the model for future research are also discussed.