Method development for the analysis of soil bacterial communities 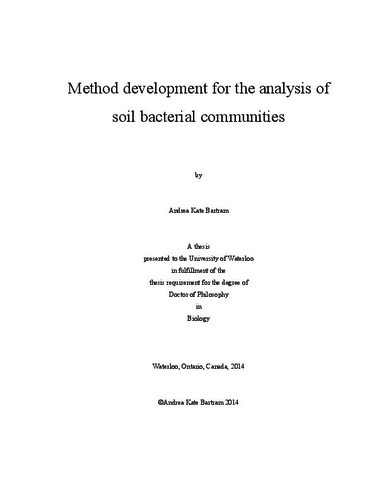 Due to the tremendous diversity and abundance of microbes in environmental and host-associated environments, adequate characterization of these samples remains a challenge for microbiologists. In order to increase the depth of sampling for diverse bacterial communities, this thesis research developed a novel method for sequencing and assembly of millions of paired-end reads from the 16S rRNA gene (spanning the V3 region; ~200 nucleotides), using Illumina-based next-generation sequencing. To confirm reproducibility and identify a suitable computational pipeline for data analysis, sequence libraries were prepared in duplicate for both a defined mixture of DNA from known cultured bacterial isolates (>1 million post-assembly sequences) and from an Arctic tundra soil sample (>6 million post-assembly sequences). These Illumina 16S rRNA gene libraries represent a substantial increase in number of sequences over all extant next-generation sequencing approaches (e.g. 454 pyrosequencing); the assembly of paired–end offers a methodological advantage by incorporating an initial quality control step for each 16S rRNA gene sequence. This method incorporates indexed primers to enable the characterization of multiple microbial communities in a single flow cell lane and may be readily modified to target other variable regions or genes. Soil pH is an important determinant of microbial community composition and diversity, yet few studies have characterized the specific effects of pH on individual bacterial taxa within bacterial communities, both abundant and rare. Composite soil samples were collected over two years from an experimentally maintained pH gradient ranging from 4.5 to 7.5 from the Craibstone Experimental Farm (Craibstone, Scotland). Extracted nucleic acids were characterized by bacterial and group-specific denaturing gradient gel electrophoresis (DGGE) and were sequenced using the Illumina sequencing method describe above. Both methods demonstrated comparable and reproducible shifts within higher taxonomic bacterial groups (e.g. Acidobacteria, Alphaproteobacteria, Verrucomicrobia, and Gamma-proteobacteria) across the pH gradient. In addition, non-negative matrix factorization (NMF) was used for the first time on 16S rRNA gene data to identify positively interacting (i.e. co-occurring) operational taxonomic unit (OTU) clusters (i.e. “components”), with abundances that correlated strongly with pH, and sample year to a lesser extent. The OTUs identified by NMF were visualized within principle coordinate analyses of UniFrac distances and subjected to taxonomic network analysis (SSUnique), which plotted OTU abundance and similarity against established taxonomies. Most pH-dependent OTUs identified here would not have been identified by previous methodologies for microbial community profiling and were unrelated to known lineages. Methods to limit and reduce carbon emissions are becoming increasingly important for circumventing future impacts of climate change. Biochar is a recalcitrant aromatic-carbon compound formed during pyrolysis in an anoxic environment. The use of lignocellulosic waste material as an input for biochar generation acts as a carbon sink when applied as a soil amendment. Biochar added to soil has been shown to have beneficial effects on crop yield, soil pH, nutrient retention, and fertilizer requirement. However, impacts of biochar applications on soil microbial communities are not well characterized. In order to assess the impact of biochar application on soil microbial communities, two studies were conducted: a multi-year Canadian field trial and a controlled microcosm study. Together, these studies enabled the assessment of the microbial response to biochar, both with and without the influence of above-ground vegetation, respectively. Field trial samples were collected in 2010, with rhizosphere and bulk soil taken from agricultural plots planted with corn, switchgrass, and soybean, amended with either 0 or 20 t ha-1 of dry biochar. The field experiment was also performed on two contrasting soil types: a sandy soil and a loam soil. The microcosm study was conducted over a period of twenty weeks, with biochar added at rates equivalent to 0, 20, 40, and 60 t ha-1 to a loam soil in an anoxic incubation system (1 L Mason jar). Nucleic acids were extracted from these soil samples and used as template for bacterial 16S rRNA gene fingerprinting (denaturing gradient gel electrophoresis; DGGE) and amplicon sequencing (101,448,506 assembled sequences generated by Illumina). The resulting fingerprints and PCoA plots based on UniFrac distances indicated that the largest factor governing the microbial community in the field study was soil type, followed by plant type. On the other hand, the corresponding PCoA plots for the microcosm study showed strong separation between biochar-amended samples and controls, in addition to separation corresponding to incubation time. DGGE fingerprints for the microcosm study showed a predominant biochar-associated band. The corresponding sequence in the Illumina libraries classified as an uncultured Gammaproteobacteria clone and increased in abundance in biochar-amended samples and was absent from the no-biochar controls. These results indicate that microbial communities detected in the field were controlled primarily by soil type and vegetation cover rather than biochar application, but strong biochar-dependent shifts were observed in the microcosm study.