A House of No Importance: The rise and fall of Nasr City’s middle class extended family houses 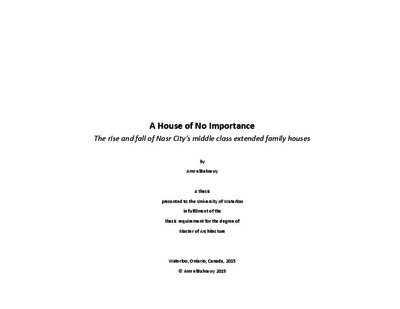 Since its urban boom around the mid 1980s, the Cairene residential district of Nasr City has been the hub for a unique housing phenomenon. It has seen middle class professionals appropriating its apartment building typologies into households for their extended families. Over the past ten years, however, many of those families have been aiming to relocate their households to the emerging suburban developments on Cairo’s periphery. This desire seems to be driven by nothing more than their aspiration for the simulacrums of luxury and social status associated with suburban living. Apart from superficial stylistic variations in architectural expression, the housing typologies in these suburbs offer the same functional arrangements as those in Nasr City; and as per their building bylaws they accommodate the co-existence of fewer extended family generations. These facts, coupled with the increased financial hardships involved in acquiring a new suburban dwelling, highlight the absurdity of the middle class professionals’ desire for such relocation. Not only does it deplete their monetary standing in an Egyptian society that now recognizes size of income and wealth as the only measures of social status, but it also debases the solidarity inherent in their characteristic intergenerational living. That is to say, it compromises the basis of the very social status they are aiming to preserve. This thesis tracks the history of 11 El-Insha Street, an apartment building–extended family household in Nasr City, as well as the history of the street it stands on, over the span of 30 years. That narrative serves as the basis for a discussion of the evolution of the Egyptian middle class, Nasr City, and the apartment building – extended family house typology. Through an extensive analytical framework of demographic and urban data, the discourse of this thesis tracks the link between middle class professionals and that particular housing typology; its particular prevalence in Nasr City once upon time; and the current trend of its extinction as its inhabitants relocate to the suburbs.