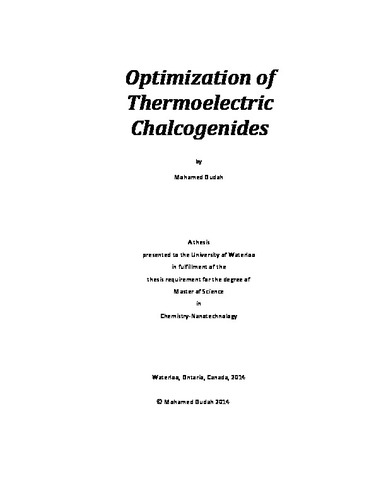 Thermoelectric (TE) materials can convert heat into electricity when a temperature gradient is applied (Seebeck effect), and can pump heat from the cold end to the hot end using electricity (Peltier effect). These materials have shown improved properties in recent years, and promising bulk materials have been uncovered by many research groups. Chalcogenide containing materials are the leading TEs today, and examples uncovered by the Kleinke group include Tl4(Zr,Hf)Te4, Ba3Cu16–xS11–yTey, and BaCu6-x(S,Se)Te6. Initial evaluation of cold-pressed pellets of these materials showed potential for TE application, with a high figure-of-merit, zT, which relates to the efficiency of a material in converting heat into electricity. This zT is a dimensionless figure composed of heat and electrical transport properties of a material through the equation: zT=〖Tα〗^2 σκ^(-1), where α is the Seebeck coefficient, σ the electrical conductivity, and κ the thermal conductivity, measured at a specific temperature (T). A zT value above unity is desired for a bulk material to be used for power generation. The biggest challenge in optimizing TE materials is decoupling the properties contributing to zT, and tuning the properties in a way that improves the zT overall. In this work, it is demonstrated that the zT value for a material can be improved through doping and hot pressing to close to ideal density. Adding Nb to Tl4ZrTe4 improved the zT compared to the ternary sample by enhancing the electrical conductivity. The zT of the samples of nominal composition "Tl4ZrNb0.04Te4" and Tl4Zr1.03Te4 amounted to 0.064 and 0.042 at ~500 K, respectively. Properties of undoped Tl4HfTe4 were also compared to those of Tl4Zr1.03Te4, and Tl4HfTe4 had a higher zT of 0.08 at ~480 K, which is however still too low for any application. Varying the x and y values in Ba3Cu16–xS11–yTey achieved the highest zT for Ba3Cu15.1S8Te3, amounting to 0.78 at ~780 K. However, after six repeat electrical property measurements, these samples showed color change, which was confirmed, via EDX measurement, to be the result of Cu atoms migrating across the material. In contrast, BaCu6-x(S,Se)Te6 showed great stability after repeat measurements, which is attributed to localized mobility of Cu atoms. The properties of BaCu6-x(S,Se)Te6 were measured, and zT values of 0.52 at 580 K and 0.81 at 600 K were obtained for BaCu5.9STe6 and BaCu5.9SeTe6, respectively.