Characterization of counterion effects of gemini surfactants and in vitro studies of transfection efficiency for gene therapy in epithelial ovarian cancer. 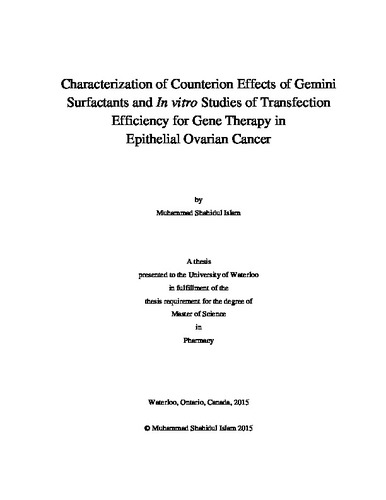 Gene therapy has emerged as a promising strategy for the treatment or prevention of many acquired or genetic diseases that are considered incurable at the present time. Although viral and non-viral vector approaches are the major techniques employed for somatic gene transfer, non-viral vectors (cationic liposomes, dendrimers, chitosans, polymers & surfactants) have attracted great interest recently, due to their unique properties. A number of non-viral carriers have been extensively investigated and developed in recent years for targeted drug delivery or gene therapy in various pre-clinical/clinical trials. Despite this, the quest for new non-viral carriers with improved transfection and low toxicity is still proceeding, driven by a need to overcome safety concerns associated with viral vectors. Of the non-viral vectors, an intriguing class of building blocks which has elicited extensive interest are the third generation di-cationic surfactants: a class of bis-surfactants called “gemini surfactants (GSs)”. The interest is due to their unique self-assembly, hundredfold lower CMC (compared to their monomeric counterparts), thousand-fold improved surface activity, and ability to form a rich array of aggregate morphologies. In this project, the effect of various inorganic and organic counterions on micellization was studied and analyzed at air–water surfaces as well as in bulk solutions. Additionally, the size & zeta potential of the nanoparticles, and the in vitro transfection efficiency studies in human ovarian cancer cell lines were also analysed to investigate the dominant influence of the anions on the aggregation behavior and DNA delivery efficiency of eight surfactants of the ethanediyl-α,ω-bis-(dimethylhexadecyl-ammonium) type, [C16H33(CH3)2-N-(CH2)2-N-(CH3)2C16H33].2X– referred to as gemini 16-2-16; where X refers to the counterion were studied. Counterions of chloride (Cl–), bromide (Br–), ½ malate (C4H4O5– –), ½ tartrate (C4H4O6– –), adenosine mono phosphate, AMP (C10H13N5O7P–), guanosine mono phosphate, GMP (C10H13N5O8P–), cytidine mono phosphate, CMP (C9H13N3O8P–), and uridine mono phosphate, UMP (C9H12N2O9P–) were investigated and were classified into three different categories depending on their nature: (1) small inorganic counterions [chloride (Cl–), and bromide (Br–)] taken from the Hofmeister series were studied to focus on the effect of ion type; (2) Hydroxy-alkyl di-carboxylate counterions [malate (C4H4O5– –), and tartrate (C4H4O6– –)] were studied to focus on the effect of the hydrophilicity of counterions; and (3) heterocyclic ring containing nucleotide mono phosphate counterions were included to focus on mainly self-assembly and other parameters. We demonstrate the influence of different anions associated with this 16-2-16 series of gemini by analyzing the effect of counterions on the micellization and aggregation behavior of these gemini surfactants, characterized by determination of the critical micelle concentration (CMC), degree of micelle ionization (α), and free energy of micellization (ΔGM) and are discussed in terms of the hydrophilicity of anions, counterion hydration, interfacial packing of ions, and ionic morphology. Our results clearly revealed that a counterion effect on micellization and aggregate morphology, attributed to the balancing and controlling forces of the counterions to the surfactant itself. Hydrogen bonding among the –OH groups of the counterions (where applicable) and water molecules, as well as the strong hydrophobic interaction among the hydrocarbon side chains is postulated to be the main origins for the unique aggregation behaviors of these gemini surfactants. These amphiphiles can form both micelles and vesicles spontaneously with a micelle-to-vesicle transition at a concentration above the respective CMC. Furthermore, the size & zeta potential characterizations along with the in vitro transfection data manifest the significant impact of counterions on the GSs as therapeutic drug delivery carrier. Our transfection efficiency (TE) data also demonstrated that the surface charge density of the particles formed by the GSs is the predominant factor for cellular uptake and consequent TE of the respective GSs.