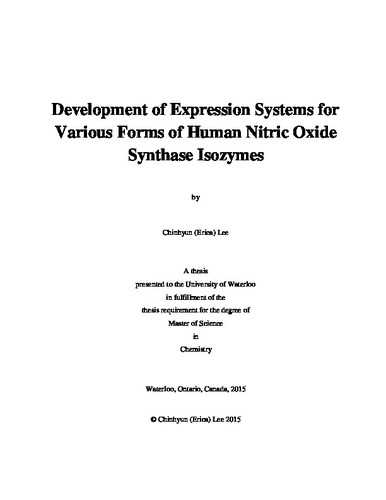 Nitric oxide (NO) is one of the important biological molecules which has functions in neurotransmission, vasodilation, and immune responses. However, excess levels of NO have been associated with neurodegenerative and inflammation-related diseases. Nitric oxide synthase (NOS) is the enzyme that catalyzes the synthesis of NO from L-arginine in biological systems, and has been a potential target for inhibition. Three isoforms of NOS exist in mammalian systems: neuronal NOS (nNOS), endothelial NOS (eNOS), and inducible NOS (iNOS). While nNOS and eNOS are named according to where they are expressed, iNOS is named by its inducible expression. The structures of the active sites of the three isoforms are determined to be similar. This has been posing a challenge in the development of NOS inhibitors, because inhibition of eNOS has been shown to ultimately lead to hypertension and atherosclerosis. To overcome this, researchers have examined a wide variety of possible inhibitors. Binding of the inhibitors to non-human NOS isoforms was often studied by crystallography and by mutagenesis studies. However, none of the inhibitors have been approved for clinical applications. In this study, expression systems for different forms of human NOS isozymes were investigated. This involved molecular cloning of expression vectors for human full-length NOS isozymes and their oxygenase domains. It has been demonstrated that preparations of oxygenase domains is easier giving good yields due to their smaller size compared to the holoenzymes. After confirmation of the molecular cloning of the expression vectors by restriction enzyme digestions and by DNA sequencing, expression and purification of the oxygenase domains were attempted. As N-terminal histidine tags were present in the oxygenase domains, protein purifications were carried out in nickel affinity columns. For the human nNOS oxygenase domain with the CaM-binding region, the protein was also purified by a glutathione column as a second purification step with the addition of glutathione S-transferase-tagged calmodulin (GST-TEV-CaM). It is shown that the oxygenase domains are well expressed but further protein purification is required. Lastly, expression and purification of GST-TEV-CaM were developed and optimal cleavage reaction conditions of GST-TEV-CaM by TEV protease were studied. From this study, optimal cleavage reaction condition is identified for GST-TEV-CaM which can be used in the purification of various forms of human NOS isozymes. These studies will allow optimization of purification of human forms of NOS oxygenase domains and holoenzymes for binding studies with NOS inhibitors.