Making the City : A Document on Tactical Urbanism 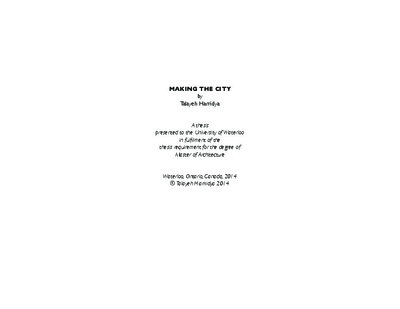 In the past decade city of Toronto has seen an unprecedented growth in its population. This surge on growth of the city poses questions about the quality of its future public and private spaces and its patterns of growth. In the face of these questions the thesis briefly navigates the political and economic landscape of Toronto and its most common practices of city making in search for alternatives. It proposes a new type of urbanism that is driven by ordinary people. This urbanism allows for building a city that is more reflective of the multitude and complex sum of the urban population of Toronto and is more compatible with the rapid cycles of economy, new paradigms in culture and the unforeseen conditions of growth. Tactical Urbanism, as a response to aforementioned conditions, uses tactics to influence the long term planning, rearrange power in the field of action and make use of limited resources. According to Michel De Certeau, tactic is the ruse of players in a field that is dominated by others. In this case the field is the city, the objective is building public and shared spaces and the City and developers are the dominant players. In this thesis four separate projects, that were developed and undertaken between June 2012 and October 2013 in Toronto by the author and in collaboration, are presented as experiments for examining the effectiveness, techniques and possibilities within Tactical Urbanism. Developed mostly based on the concept of détournement (diversion), borrowed from the Situationist International, two streams of experiment are developed: one that is defined by temporary appropriation of space and the other by narrating the city through dynamic and ludic space of walking. Both of these streams of action are concerned with the personal relationship of people and places and focus on fostering a sense of belonging and ownership over the urban built environment.