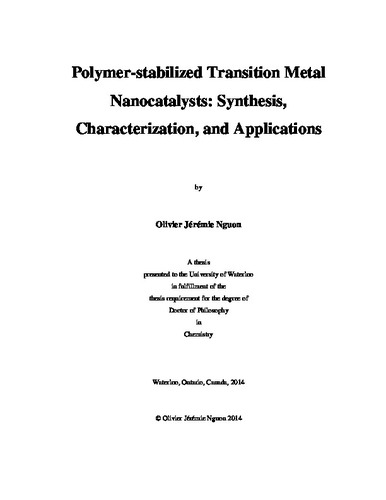 Novel polymeric architectures and analytical methods were designed for the synthesis, characterization, and applications of metallic nanocatalysts. Four main research areas were investigated, namely: i) palladium nanocatalysts, ii) metal content analysis by a novel microplasma-based technique, iii) polyion complex micelle-metal hybrid structures, and iv) nickel nanocatalysts. The solution and solid-state properties of dendrigraft (arborescent) polystyrene-graft-poly(2-vinylpyridine) copolymers were studied by dynamic light scattering (DLS) and atomic force microscopy (AFM). The unimolecular micelles exhibited good colloidal stability and narrow size distributions in organic solvents, and a fried egg morphology when deposited onto mica substrates. The preparation of stable colloidal Pd nanoparticles within the dendritic templates was reported for the first time. The diameter of the nanoparticles varied from 0.7 to 3.4 nm depending on the loading level, reduction time, and arborescent copolymer generation used. The catalytic activity of the colloidal Pd nanoparticles was evaluated in the Suzuki-Miyaura (SM) cross-coupling reaction under green conditions. Good catalytic activity and a positive dendritic effect were evidenced, although air-sensitivity and flocculation limited the activity and recyclability of the catalysts. To determine the concentration of Pd in the copolymers, a novel microplasma-based technique was applied in organic solvents for the first time. Metal quantification by microplasma-optical emission spectrometry revealed stoichiometric complexation of the Pd salt by the pyridine groups, and kinetic aggregation studies highlighted the benefits of the polymer for colloidal stability. To obtain Pd nanoparticles dispersible in high water content solutions, polyion complex micelles were synthesized from arborescent copolymers and double-hydrophilic block copolymers. The latter, viz. poly(acrylic acid)-block-poly(2-hydroxyethyl acrylate), were obtained by hydrolysis of poly(tert-butyl acrylate)-block-poly(2-trimethylsilyloxyethyl acrylate), synthesized by atom transfer radical polymerization. The self-assembled complexes formed supramolecular aggregates with hydrodynamic diameters of 132 to 354 nm and narrow size distributions. The assemblies exhibited thermo-responsive properties in ethanol, dissociating above ca. 35 °C and reforming upon cooling. The polyion complexes, with hydrodynamic diameters ranging from 110 to 306 nm, were stable in water and were used for the solubilization of Pd nanocatalysts for aqueous Suzuki-Miyaura reactions. Lastly, the properties of nickel nanoparticles prepared at Vale-Inco by a novel thermal decomposition method were investigated. The specific surface area of the bare nanopowders ranged from 6.4 to 97.2 m2∙g-1, and their catalytic activity in the hydrogenation of adiponitrile and mesityl oxide was higher than for commercial catalysts in some cases. Treatment of the nanoparticles with diethylenetriamine further improved their catalytic activity. Polymeric stabilizers were designed to maximize the dispersibility and catalytic activity of the nanopowders. The structures investigated included triblock copolymers of polystyrene with poly(ethylene oxide) or poly(2-vinylpyridine), and telechelic poly(ethylene glycol). Application of the polymer-stabilized nickel catalysts in hydrogenation yielded up to 15-fold increases in specific catalytic activity as compared to the bare particles. The polymer was also effective at preventing oxidation by air under storage.