No Common Ground: Atlas of Resistance and Control During the 2010 Toronto G20 Summit 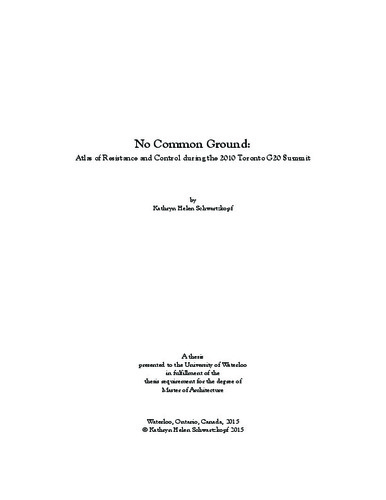 Architecture and legislation describe the spaces of the city, and the activities they contain. ‘Security’ can dislodge this public space. This is especially true during gatherings of global leaders within major cities. The threat of terrorism and the temporary nature of these events tend to excuse authoritarian treatment of public space. The Toronto G20 summit of June 2010 is a model for the dynamic between resistance and control, the unmediated relationship between these two forces, and the resulting change in freedom and movement in the modern city. During the Toronto G20 Summit, security was used on an exceptional scale: first, through architectural design and secondly, through the tight enforcement of existing legislation. The G20 security apparatus made changes to the natural flows and spatial relationships of the city. Everyone who came into the downtown core was confronted with these changes. This work focuses on how crowds moved through and appropriated space in downtown Toronto during the protest demonstrations that took place during the summit. It examines how the space of the city shaped these movements and how the security apparatus reconfigured the space in order to control it. In the aftermath of the G20 Summit many narratives competed to become public record. The information presented in this work was compiled from information readily available on the Internet. Sources of information came from government documents, news articles, blogs, and social media sites. To obtain a spatial analysis of the event, these fragments of information have been collated according to time and space. The work organizes the information into three modes of representation: text, image, and map. Two essays – “Two Cities” and “No Common Ground” – explore the ramifications of layering a repressive security apparatus on top of the modern city. A photo essay catalogues images of the security of the G20 Summit, the demonstrations and the interactions between activists and the police. A series of original maps, organized according to five significant turning points amid the events of the summit, provides spatial context for the text and images and emphasizes the relationship between event and space. A time log, included as an appendix, complements the work by weaving text, image, and map into a comprehensive account of events. The events of the G20 Summit have a form that is intimately connected to the space of the city. By heavily restricting areas of the city that are normally considered accessible or common to all, the government transformed a thriving metropolis into a ghost town. In this environment, all political action, even simple act of occupying public space, becomes subversive.