The Effect of Familiarity and Complexity of Environments, and Mode of Wayfinding on Gaze and Memory 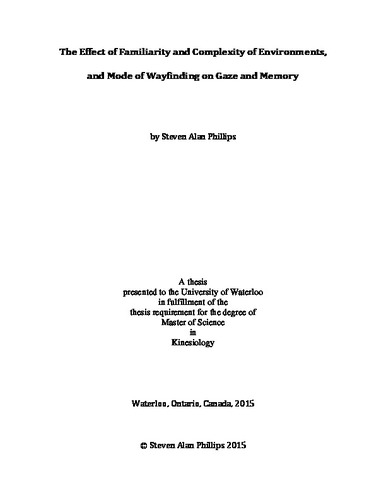 Whether we travel the well-known route to work or unfamiliar streets in a new city, we use wayfinding in order to determine and follow a route to get to our destination. Wayfinding is dependent on cognitive processes, specifically attention and memory which has been reinforced in the observation of challenges in wayfinding among individuals who have suffered cognitive dysfunction as the result of neurologic injury or diseases (eg stroke or Alzheimer’s). The studies are focused on advancing the understanding of the role of visual attention, associated gaze behaviour, and memory on the control of wayfinding. The first study focused on determining how changes in the familiarity and complexity of an environment influence visual attention during wayfinding. The second study investigated how the method of learning an environment, either actively or passively, would influence gaze behaviour. The results from study 1 showed that both novel and visually complex environments were characterized by an increase in the number of fixations, and therefore the amount of directed attention towards landmarks when wayfinding. Study 2 revealed that when learning an environment actively there is an increase in fixations and directed attention when compared to learning an environment passively. However this increase in the number of fixations did not lead to better wayfinding performance when attempting to repeat the route, or an ability to recall landmarks from memory. By understanding what components of an environment, and how we learn an environment influence the allocation of attention and the ability to store our surroundings into memory in healthy individuals we may reveal potential tools for designing rehabilitation techniques for cognitively impaired populations.

Steven Alan Phillips (2015). The Effect of Familiarity and Complexity of Environments, and Mode of Wayfinding on Gaze and Memory. UWSpace. http://hdl.handle.net/10012/9118