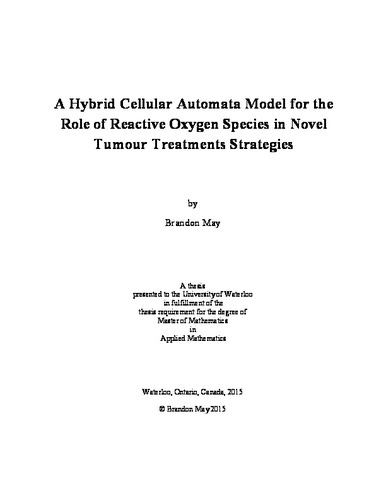 Cancer is a disease that entails uncontrolled proliferation and a disruption of tissue function that often results in a poor clinical outcome. Furthermore, it has continued to elude any universal treatment or cure in part because of the complexity seen across multiple spatial and temporal scales. In silico modelling techniques, such as hybrid cellular automata (HCA), provide an inexpensive and versatile means of incorporating experimental factors that are either impossible or infeasible to control and investigate when using in vivo or in vivo experimental settings. Reactive oxygen species (ROS) are critical molecules in cellular processes and have been demonstrated to induce effects on cellular processes ranging from proliferation to metabolic reprogramming and cell death. Dichloroacetate (DCA) and intravenous vitamin C (VC) are two proposed treatments that induce death via ROS and have begun to gain attention from the oncology community for their relative lack of toxicity and potential efficacy. Thus, investigating a HCA model to optimize their effects can be influential in the success of these drugs. The model employed uses discrete rules for the evolution of each cell, and continuous equations for diffusible elements so that multiple time scales may be incorporated effectively. The implementation of components such as necrotic cell removal and accurate pharmacokinetics in the model has a considerable effect on outcome of VC treatment individually and in combination. Furthermore, VC is most effective at removing tumour cells entirely when its plasma concentration is maximized, while DCA’s cytotoxic action plateaus as its concentration increases and is only effective at removing cell types that exist within the interior of the tumour.