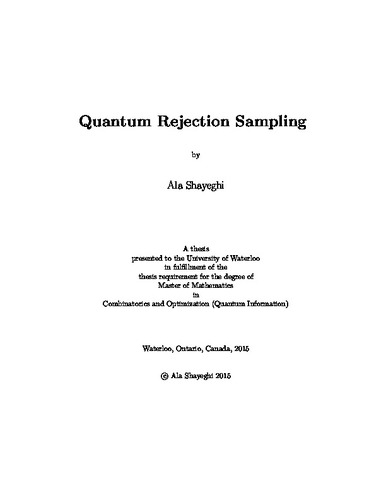 Let H be a finite dimensional Hilbert space and ρ, σ ∈ D(H) be quantum states in H such that S(ρ||σ) is finite. In this thesis, we consider the following communication task involving two parties Alice and Bob. Suppose that Alice is given a classical description of the states ρ and σ. Given an unlimited number of copies of an entangled state whose marginal on Bob’s side is σ, Alice’s goal is to help Bob output a single copy of the state ρ by sending a single message to Bob in a one-way LOCC (short for local operation and classical communication) protocol. We propose a class of one-way LOCC protocols for this task which we refer to as quantum rejection sampling protocols. Inspired by the classical rejection sampling protocol of Harsha, Jain, McAllester, and Radhakrishnan [25] for a similar classical communication task, we introduce the Greedy Quantum Rejection Sampler. We characterize the expected communication cost of the protocol in terms of max-relative entropy of ρ with respect to σ, in the case where the state ρ is a pure state and prove that the Greedy Quantum Rejection Sampler is an optimal quantum rejection sampling protocol in this case. We describe an optimal quantum rejection sampling protocol in terms of a semidefinite program and we find general lower bounds and upper bounds on the expected communication cost of the optimal protocol. We propose an LOCC compression protocol based on the Greedy Quantum Rejection Sampler protocol, for lossless compression of an arbitrary pure state quantum source in the visible compression model and we show an upper bound on the average length of this encoding. The upper bound is always less than or equal to the Shannon entropy of the quantum source and the gap between the two quantities can be arbitrary large. Finally, we introduce a high-entanglement deterministic exact protocol for remote preparation of an arbitrary ensemble of quantum states. Our protocol is based on a quantum rejection sampling protocol which uses a prefix-free encoding for communication of the messages. We establish an upper bound on the expected communication cost of this protocol for the worst case choice of the target state in terms of the max-information in Bob’s output register at the end of the protocol about Alice’s classical input register. Furthermore, this protocol can be used as a non-oblivious universal protocol for exact remote preparation of an arbitrary d-dimensional state at an expected communication cost of at most lg(d) +O (lg(lg(d))).