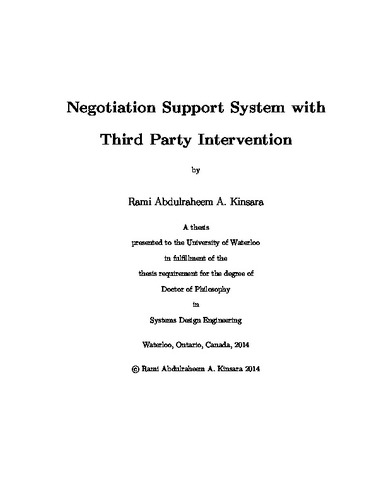 A flexible methodology is developed to specify how a desired outcome can be reached in a given conflict by determining the preference structures required for the decision makers to find it stable. The objective of this methodology is to provide informed collective negotiation support. This new methodology is generated by reverse engineering some Graph Model for Conflict Resolution (GMCR) procedures and is therefore called "Inverse GMCR". The essence of Inverse GMCR is to determine whether and how a strategic conflict can be ideally resolved, which may inform the mediators of strategies to achieve this resolution. Formal definitions and mathematical representations for the new Inverse GMCR methodology are formulated in this thesis. The four basic graph model stability definitions, Nash stability (R), general metarationality (GMR), symmetric metarationality (SMR), and sequential stability (SEQ) are redefined for Inverse GMCR as Nash IPS, GMR IPS, SMR IPS, and SEQ IPS, respectively where IPS stands for Inverse Preference Structure. Pattern recognition and inverse calculations are used to generate strategies that permit mediators to negotiate a desired resolution. Mediation, or third party intervention, is strengthened by utilizing the insightful information provided by the Inverse GMCR methodology and the negotiation support system. An in-depth strategic investigation and analysis of a complex water conflict in the Middle East is carried out to test and refine the algorithms developed here. This conflict occurred along the Euphrates River and had three key time points when the conflict escalated to the brink of a full scale war, in 1975, 1990, and 1998. A comprehensive analysis of the conflict is undertaken, including bilateral and trilateral negotiations both before and after mediation. Based on the new Inverse GMCR and existing algorithms, an advanced decision support system (DSS) is designed, built, and illustrated using real world conflicts. The new DSS, called GMCR+, is capable of handling a wide variety of decision problems involving two or more decision makers (DMs). Given the DMs, the options or courses of action available to each of them, and each DM's relative preferences over the scenarios or states that could occur, GMCR+ can calculate stability and equilibrium results according to a range of solution concepts that explain human behavior under conflict. Then the inverse component of the DSS, GMCR+, can determine the preference rankings of DMs that produce stable states and equilibria as specified by the user. Other features incorporated into GMCR+ include coalition analysis, graph and tree diagram visualization, narrative reporting of results, and a tracing feature that shows how the conflict could evolve from a status quo state to a desirable equilibrium or other specified outcome. The system GMCR+ has a modular design in order to facilitate the addition of further advances. The overarching purpose of this research is to provide a simple and intuitive methodology to better understand and resolve actual conflicts. The GMCR+ DSS was developed in order to implement the Inverse GMCR methodology in the context of the standard graph model functions and in a practical way. Analysis and investigation of real world examples demonstrate the applicability of the methodology in various domains.