An Improved Framework for Watershed Discretization and Model Calibration: Application to the Great Lakes Basin 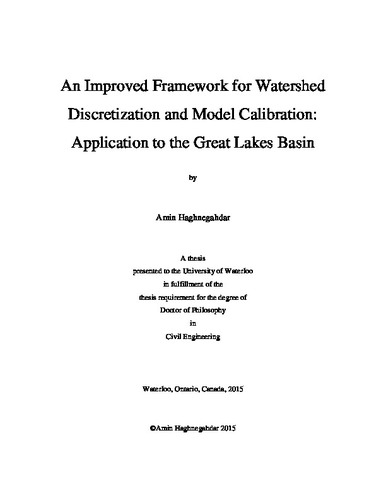 Large-scale (~103–106 km2) physically-based distributed hydrological models have been used increasingly, due to advances in computational capabilities and data availability, in a variety of water and environmental resources management, such as assessing human impacts on regional water budget. These models inevitably contain a large number of parameters used in simulation of various physical processes. Many of these parameters are not measurable or nearly impossible to measure. These parameters are typically estimated using model calibration, defined as adjusting the parameters so that model simulations can reproduce the observed data as close as possible. Due to the large number of model parameters, it is essential to use a formal automated calibration approach in distributed hydrological modelling. The St. Lawrence River Basin in North America contains the largest body of surface fresh water, the Great Lakes, and is of paramount importance for United States and Canada. The Lakes’ water levels have huge impact on the society, ecosystem, and economy of North America. A proper hydrological modelling and basin-wide water budget for the Great Lakes Basin is essential for addressing some of the challenges associated with this valuable water resource, such as a persistent extreme low water levels in the lakes. Environment Canada applied its Modélisation Environnementale-Surface et Hydrologie (MESH) modelling system to the Great Lakes watershed in 2007. MESH is a coupled semi-distributed land surface-hydrological model intended for various water management purposes including improved operational streamflow forecasts. In that application, model parameters were only slightly adjusted during a brief manual calibration process. Therefore, MESH streamflow simulations were not satisfactory and there was a considerable need to improve its performance for proper evaluation of the MESH modelling system. Collaborative studies between the United States and Canada also highlighted the need for inclusion of the prediction uncertainty in modelling results, for more effective management of the Great Lakes system. One of the primary goals of this study is to build an enhanced well-calibrated MESH model over the Great Lakes Basin, particularly in the context of streamflow predictions in ungauged basins. This major contribution is achieved in two steps. First, the MESH performance in predicting streamflows is benchmarked through a rather extensive formal calibration, for the first time, in the Great Lakes Basin. It is observed that a global calibration strategy using multiple sub-basins substantially improved MESH streamflow predictions, confirming the essential role of a formal model calibration. At the next step, benchmark results are enhanced by further refining the calibration approach and adding uncertainty assessment to the MESH streamflow predictions. This enhancement was mainly achieved by modifying the calibration parameters and increasing the number of sub-basins used in calibration. A rigorous multi-criteria comparison between the two experiments confirmed that the MESH model performance is indeed improved using the revised calibration approach. The prediction uncertainty bands for the MESH streamflow predictions were also estimated in the new experiment. The most influential parameters in MESH were also identified to be soil and channel roughness parameters based on a local sensitivity test. One of the main challenges in hydrological distributed modelling is how to represent the existing spatial heterogeneity in nature. This task is normally performed via watershed discretization, defined as the process of subdividing the basin into manageable “hydrologically similar” computational units. The model performance, and how well it can be calibrated using a limited budget, largely depends on how a basin is discretized. Discretization decisions in hydrologic modelling studies are, however, often insufficiently assessed prior to model simulation and parameter. Few studies explicitly present an organized and objective methodology for assessing discretization schemes, particularly with respect to the streamflow predictions in ungauged basins. Another major goal of this research is to quantitatively assess watershed discretization schemes for distributed hydrological models, with various level of spatial data aggregation, in terms of their skill to predict flows in ungauged basins. The methodology was demonstrated using the MESH model as applied to the Nottawasaga river basin in Ontario, Canada. The schemes differed from a simple lumped scheme to more complex ones by adding spatial land cover and then spatial soil information. Results reveal that calibration budget is an important factor in model performance. In other words, when constrained by calibration budget, using a more complex scheme did not necessarily lead to improved performance in validation. The proposed methodology was also implemented using a shorter sub-period for calibration, aiming at substantial computational saving. This strategy is shown to be promising in producing consistent results and has the potential to increase computational efficiency of this comparison framework. The outcome of this very computationally intensive research, i.e., the well-calibrated MESH model for the Great Lakes and all the final parameter sets found, are now available to be used by other research groups trying to study various aspects of the Great Lakes System. In fact, the benchmark results are already used in the Great Lakes Runoff Intercomparison Project (GRIP). The proposed comparison framework can also be applied to any distributed hydrological model to evaluate alternative discretization schemes, and identify one that is preferred for a certain case.