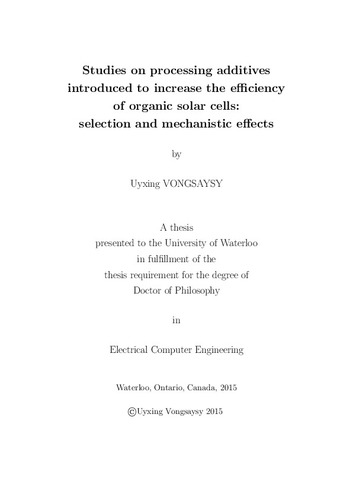 Polymeric bulk heterojunction (BHJ) organic solar cells (OSCs) have attracted significant interest as a low cost and renewable technology to harvest solar energy. Despite these advantages, their generally low power conversion efficiencies are a barrier for their movement into commercial applications. Controlling the BHJ morphology is a key step in the pursuit of higher OSC efficiencies. Processing additives have emerged as effective components for controlling and optimizing the BHJ morphology. Despite their widespread use, their mechanistic roles are not yet fully understood, thus appropriate selection remains the result of trial and error experiments. This thesis provides a comprehensive study on the introduction of processing additives in OSC formulation. The semiconductor system under study is based on poly(3-hexylthiophene) (P3HT) and [6,6]-phenyl-C61-butyric acid methyl ester (PC61BM). First, a systematic method was developed to guide the selection of processing additives from a large range of solvents. This method employs the Hansen solubility parameters to define a set of numerical criteria based on the solubility properties of the semiconductors. The method was successfully applied to the P3HT/PC61BM-system and resulted in the identification of three new efficient processing additives. Next, the mechanistic role of additives in influencing the BHJ morphology is investigated by performing structural, electrical and optical characterizations. The results suggested that processing additives lead to the formation of a BHJ with more numerous but smaller polymer crystallites. Also, the effects of additive on OSC performance differed depending on whether the OSC was fabricated in an inverted or in a conventional architecture. Such differences can be explained in terms of variations in electron and hole mobilities caused by the additive. Furthermore, photo-stability tests, performed on different types of OSCs, showed that processing additives can improve the photo-stability. The results showed that improvement was related to the formation of a more photo-stable interface with the top electrode. Finally, the scope of this study is extended to two other donor polymers. The effects of processing additives differed from those seen in the P3HT/PC61BM-system because of the different properties of these polymers.