Optical Changes during Normal Emmetropization, Lens-induced Myopia and its Recovery in the Young Chick Eye 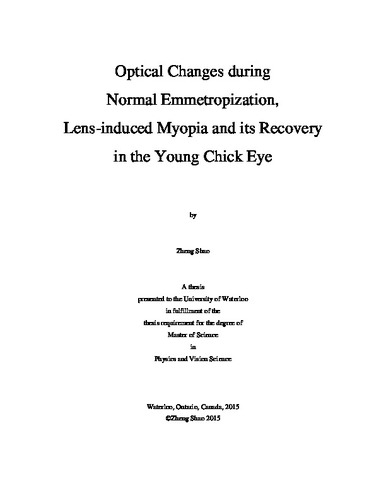 In human eyes, the at-birth hyperopoic defocus gradually decreases to mild hyperopia or emmetropia at around age 6. Studies on refractive development suggest somewhat complex mechanisms at work between eye power and length. Myopia occurs as a result of failure of normal emmetroipzation. Myopia is linked with various ocular pathologies and is now considered an independent risk factor of a range of ocular diseases. Therefore, myopia research is essential. The substantially increasing prevalence of myopia has particularly attracted researchers’ attention. Any improvement in the understanding of the mechanisms of normal emmeropization and myopia development has the potential to introduce interventions that can limit or prevent myopia incidence and/or progression. The eye power calculation presented is simpler than other approaches and provides an accurate power variation during normal emmetropization without the need for ex vivo measurements. Eye power calculation during normal growth showed a decrease in eye power and that the small difference between the rate of change in eye power and that of dioptric eye length, gives a decrease in MOR. When we modify the eye power calculation with one additional assumption, it can to be applied to myopic eyes. During emmetropization to hyperopoic defocus (LIM) and its recovery, eye power calculations based on different additional assumptions confirm a change in the optics, either in the positions of cardinal points or in the focal length, depending on the assumptions used. Changes in curvatures of the ocular surfaces remain to be assessed. Emmetropization is an active mechanism; it appears to be driven by values of angular blur due to defocus which are above the level of the cone photoreceptor resolution during emmetropization. Angular blur reaches a level similar to cone spacing at the completion of emmetropization. Rates of change in optical axial length (OAL), corneal radius and the lens power are proportional to angular blur, causing blur to reduce significantly. Angular blur varies linearly with MOR and its rate of change. After emmetropization, the constant angular blur and slightly increasing linear blur suggest that eye growth might be relatively uniform. The links between rates of change in OAL, corneal radius and the lens power during and after emmetropizaton may be related to a common signaling molecule or via passive mechanisms. During LIM and recovery from it, VCD is a main contributor to changes in mean ocular refraction. However, the relative change in the front of the eye (represented by anterior cornea to back lens distance) is proportional to the relative change in OAL and is important to overall OAL changes compared to the control eye. The change in eye power in relation to the change in eye length is important to normal emmetropization. The optics also changes during LIM and the recovery from it. In addition, in normal growth, a direct link between the changes in ocular parameters and retinal blur is shown. Since many of these results are consistent with findings during emmetropization in children, the link between the changes in ocular parameters and retinal blur may be important to understanding normal development and development of myopia in human.