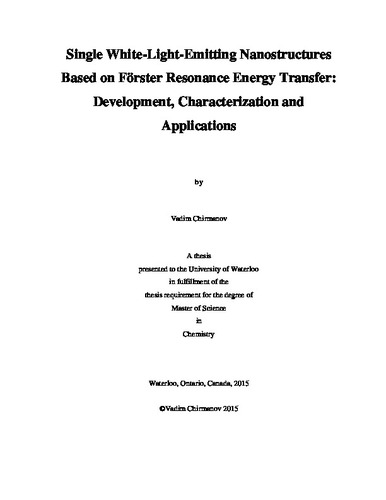 Electric energy use associated with lighting reaches up to 3400 Terawatts hours and constitutes approximately 20 % of the world total electricity output per year. That in turn contributes to the release of at least 1900 Mt of CO2 gas in the Earth's atmosphere. Light emitting diodes have emerged as a possible substitute for the conventional light sources and much effort is directed toward improving them. This project presents results on the development and characterization of white-light-emitting chromophores based on the Förster resonance energy transfer between γ-Ga2O3 and organic dyes. Several experiments were performed to estimate the average number of Rhodamine B molecules per Ga2O3 nanocrystal. Under standard conditions efficiency of the energy transfer was found to be between 24 - 49 % for the 3.6 and 5.3 nm nanocrystals, resulting in the average donor-acceptor separations of 2.97 and 3.67 nm, respectively. Data analyses revealed close dependence of the process on the average nanocrystal size. Additional experiments were also conducted with ATTO-590, displaying similar trends. Generation of white light was achieved based on the color complementarity between blue-emitting γ-Ga2O3 nanocrystals and the orange-emitting dye. Additional samples of ZnO with various dyes were also analyzed for color matching. Chromaticity coordinates of (0.332, 0.338) and correlated color temperature of 5528 K were obtained in the colloidal state using a 230 nm excitation source. Series of chromophores were applied to the 255 nm and 300 nm ultraviolet diodes. All devices displayed remarkable characteristics with chromaticity coordinates and color temperatures being close to the point of equal energy, and high color rendering indices. The principle of downconverting a narrow UV radiation to visible white light through resonance energy transfer was demonstrated and applied. Development of completely inorganic conjugates could potentially greatly improve the properties and expand the applications of such phosphors.