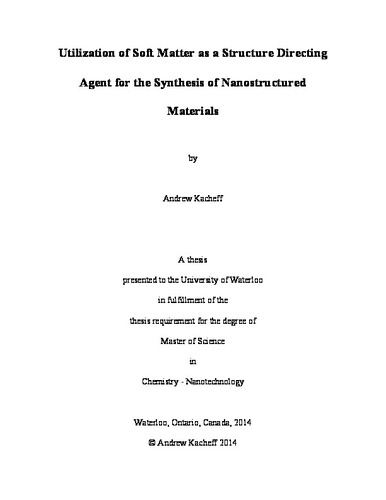 Sol-gel methods combined with the adaptive structuring properties of soft matter, have been used to create templates and synthesize mesoporous materials or nanoparticles from them. For example, micelles formed with non-ionic surfactants containing ethylene oxide have been previously used as templates to produce mesoporous silica with a particular structure. These templates are known to be dynamic and adaptable to temperature changes. When combining these surfactant micelle templates with a precursor, a silicate/surfactant hybrid micelle is formed, which was demonstrated to be dynamic as well. In a first step, this thesis explores further the structure and dynamics of these hybrid micelles, and up to which point they resemble the initial micelle. Tetraethylorthosilicate (TEOS) was used as the silica precursor to make silicate hybrid micelles using these non-ionic surfactants and their behaviour as a function of temperature and silicate concentration was investigated. In a second step, we expand the concept of soft matter-based structuring directing objects by replacing micelles with O/W nanoemulsions prepared by Phase Inversion Composition. These structures were already used as nanoreactors and porosity templates, but their use was somehow limited by their liquid nature. Therefore, we explored if solid templates could be obtained by replacing the original paraffin oil by a mixture of oil and wax. We extended further the concept of using W/O nanoemulsions as nanoreactors by testing the preparation and use of W/O nanoemulsions, and preliminary results in this strudy show that Prussian Blue analogues could be successfully synthesized. In a final step, we increased the system complexity further by combining structure-directing soft matter with inorganic nucleation and condensation in a one step reaction where 3D porous micrometric silica particles are obtained in a one-pot fast synthesis, and resulting materials were tested for HPLC application.

Andrew Robert Kacheff (2015). Utilization of Soft Matter as a Structure Directing Agent for the SYnthesis of Nanostructured Materials. UWSpace. http://hdl.handle.net/10012/9095