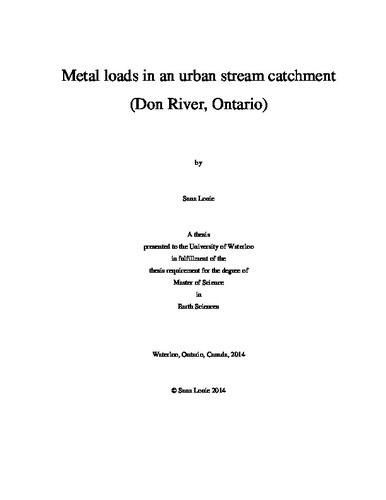 The Don River watershed has been called the most urbanized watershed in Canada. Trace metals are common contaminants in urban areas that may threaten ecosystems at high concentrations. Major urban sources of trace metal include stormwater and wastewater discharges, buried landfills, and automobile combustion. Establishing geochemical baselines for urban contaminants supports environmental assessments and improved management practices. This study focuses on copper, lead, and zinc concentrations in surface water and sediment samples within the Don River. Data collected by multiple agencies are synthesized and complemented with new measurements, including sequential extractions of sediments. Spatial and temporal trends are analyzed to identify enrichment areas and improvements or shortcomings in current monitoring efforts. Samples collected in this study from the Don River include 22 water and sediment grab samples and two sediment cores. Unfiltered surface water, sediment, and sediment core material (sliced in 1cm intervals) were microwave digested with aqua regia and analyzed by ICP-OES for total copper, lead, and zinc concentrations. Thirteen of the sediment grab samples were also used for sequential extraction by the Tessier (1979) method before analysis by ICP-OES. Monitoring data were provided by the Ministry of Environment (MOE), Environment Canada, Toronto and Region Conservation Authority (TRCA), and the Ontario Geological Survey (OGS). Water monitoring data show exceedances of provincial guideline levels for all three metals. The highest concentrations are found in the Lower Don River, Lower East River, and Taylor Massey Creek. This is expected as the downstream portion of the watershed is the most urbanized. The trace metals are strongly associated with suspended solids and increase in the river system after rain events. Without the contribution of runoffs, suspended solid concentrations are low and trace metals are near or below detection. Trace metals in bottom sediments show similar spatial trends as surface water. Particularly high concentrations are found in areas with lower discharge rates. Long-term monitoring data for the Lower Don suggest unchanged copper and zinc concentrations from 2000 to 2012. Sediment samples exhibit the highest concentrations of the three metals within the Lower Don and Taylor Massey Creek. However, the sediment samples only exceed the Lowest Effects Level (LEL) for copper. The annually dredged sediments near the river mouth provides an accurate measure of temporal trends: they show a decrease in total copper concentrations while lead concentrations have stabilized, and zinc concentrations increased. Sequential extractions show that copper concentration preferentially sorb to organic matter, while lead and zinc are preferentially associated with oxides. The exchangeable fractions of the three trace metals are highest in the upper watershed.