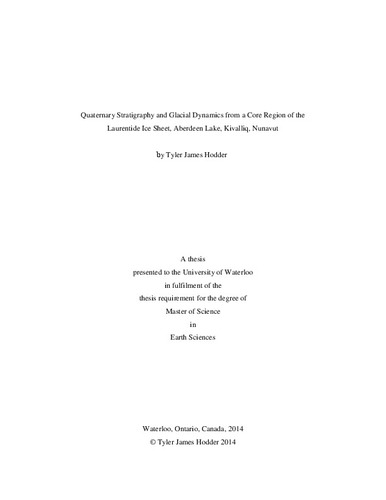 Central Kivalliq, mainland Nunavut west of Hudson Bay and north of Manitoba, was a long-standing core region of the Laurentide Ice Sheet (LIS). The location of the Keewatin Ice Divide (KID), a major ice spreading region of the LIS, has been shown to have shifted position throughout the Wisconsinan glacial cycle. The surficial record is characterized by near continuous till blanket and cross-cutting streamlined landforms. The occurrence of multi-till stratigraphy across the region raises a number of questions regarding deposition and preservation under a migrating ice divide. This study provides further mapping on the surficial record and investigates the linkages with the subsurface stratigraphy to assess the glacial dynamics evolution throughout the Aberdeen Lake region. This study was motivated by unique access to over 100 drillcores and helicopter based fieldwork, allowing a unique three-dimensional study of the glacial geology record of the Aberdeen Lake region. Field-based mapping of erosional paleo-ice flow indicators, accompanied by remote sensing mapping based on SPOT imagery of subglacial streamlined lineations exhibited a complex surficial history, recording the migration of the KID across the study area. In particular, five paleo-ice flow events are recognized: old WSW (255°) and S (180°) followed by NNW (340°), NW (300°) and finally W (270°) ice flow phases. Landforms corresponding with the NNW, NW and W ice flow phases are recognized. Landforms corresponding to the NNW ice flow phase are part of a larger northward converging landform tract that extends into northern Kivalliq. Southeast of Aberdeen Lake, a paleo-ice stream onset region was interpreted based on the erosional and depositional record observed. Quaternary stratigraphy southeast of Aberdeen Lake can reach up to 71 m in thickness, with till stratigraphy reaching 36 m in thickness. The regional till stratigraphy is grouped into five till lithofacies (Dmm 1-5 – oldest to youngest) based on their texture, geochemistry, lithological signature and colour. Dmm 1 represents an early advance into the region, possibly as a result of the WSW (255°) ice flow phase or could be a preserved depositional imprint of a previous glaciation. Evidence for deposition by an early southerly ice flow phase is recognized within Dmm 2. Dmm 3 and 4 are preceded by a southern migration of the KID and are interpreted to have been deposited by northerly ice flow phases. Dmm 5 is interpreted to be late-glacial in age, corresponding to deposition by NW – W ice flow phases. The northern ice flow phase is responsible for the majority of till production across the study area, reaching a known maximum of approximately 12 m in thickness and representing 45-70% of the stratigraphy thickness logged at across the Tatiggaq target. The recovery of Pitz Fm volcanics within the pebble fraction (4-8 mm) of this till unit south of Qamanaarjuk Lake points to transport distances of at least 55 km from the Baker Lake basin. The extent of large streamlined lineations and associated till production suggests a strong ice flow phase affected the region at a time when the Aberdeen Lake region was not in an ice-marginal setting, but instead a core region of the LIS. Based on the convergent landform imprint and extent, it is suggested this ice flow phase could represent propagation of an ice stream catchment region into central Kivalliq, which could be contemporaneous with southern migration of the KID. Furthermore, it is suggested that the documented late glacial migration of the KID could be a result of competing ice stream catchment areas, with the Hudson Strait Ice Stream catchment becoming more dominant at a later period in time. The propagation of ice stream catchment regions deep into the LIS would suggest that theoretical constructs may be underestimating the proportion of warm-based conditions and erosion/till production that existed during periods of thick ice in central Kivalliq as well as the role of migrating ice divides. This study has provided insight on the glacial dynamics of a former core region of the LIS. The Quaternary stratigraphy was delineated through river bluff and drillcores, emphasizing the dynamics of paleo-ice flow phases which is a necessary first step for successful drift prospecting in this remote region that has known uranium and gold prospects.