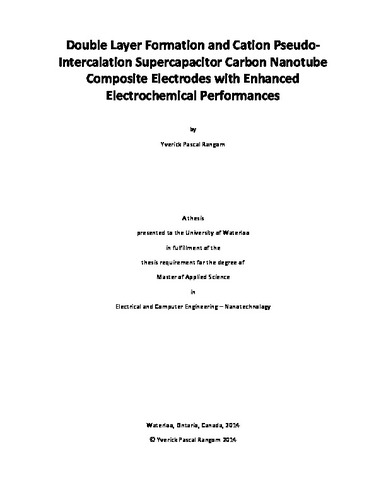 Among electrochemical energy storage solutions, redox-free supercapacitors exhibit the highest power densities and best cycle life, easily reaching over one million cycles. Despite these attributes, Li-ion batteries are preferred for most applications, especially in the much sought after electric vehicle applications. The reason is the lower energy density of the former compared to the latter. Nevertheless supercapacitor technology remains complementary to batteries in many ways. The excellent cycling performance of non-redox supercapacitors derives directly from their highly reversible charge storage mechanisms. Currently, efforts in the scientific community are being put into addressing i) low energy density, ii) compromised electronic and ionic charge transport, iii) small potential window for devices using aqueous electrolyte. All three research areas are fundamental to supercapacitor systems, however increased charge transport carries the greatest promises in terms of future device developments. The original research, presented in chapters 3 and 4 of this thesis, focuses on the characterization and optimization of electronic and ionic conduction phenomena in supercapacitors relying on double layer formation and pseudo-intercalation charge storage mechanisms. Chapter 3 features a novel carbon architecture that is both mesoporous and highly conductive based on naturally occurring carbon nanotube (CNT) mesh structure. The structure favors both mostly un-impaired ion movement and excellent electronic conductivity. Filtering these self-standing films from chlorosulfonic acid dispersions presents the critical advantage of not permanently functionalizing the carbon and fully preserves its electronic conductivity. The pristine condition of carbons after filtration is confirmed by fourier transform infrared (FTIR) spectroscopy based on comparison with the material before exposure to chlorosulfonic super-acid. The films were then mated to current collectors with different surface roughness and chemistries exposing the carbon/metal interface as a critical bottleneck limiting ultimate electronic conductivity. Surface morphologies were characterized at the micro- and nano-size with contact profilometer and atomic force microscopy (AFM) respectively. Surface oxidation was investigated through x-ray photoelectron spectroscopy (XPS) characterization. The study showed that surface morphology played the most important role in facilitating electron transfer between solids while the surface chemical composition was less of a factor. In Chapter 4, a 2-D Ti2C Mxene-CNT composite electrode was produced using a similar dispersion and filtration technique as in Chapter 3. The good chemical stability of Mxene allowed for dispersion in superacid with no effect on its inter-planar distances. That was verified by comparing spectra before and after exposure to the super-acid. Mxene phase electrodes have been demonstrated to have extremely high specific capacitance with regards to their specific surface area thanks to a charge storage mechanism that involves cations being stored in-between sheets in a pseudo-intercalation mechanism. Capacitance values around 100 F/g at 1 A/g of specific current are obtained with a total specific surface of less than 30 m2/g. The composite CNT-Ti2C electrode show significantly improved performance over the original Mxene material when cycled alone; 100 F/g capacitance is maintained at more than 100 A/g. Composite films made from an exfoliated and sonicated Mxene phase have double the volumetric energy than non-exfoliated CNT-Ti2C thanks to more dense packing of materials. Electrochemical Impedance Spectroscopy (EIS) Nyquist plots reveal a value for current collector interfacial impedance that is smaller than that of the CNT-films from Chapter 3. This result demonstrates the relevance of physical engineering of contacts, even in a situation where only conductive materials are used, showcasing the decisive advantage of the 2-D morphology of Mxene over the 1-D tubular morphology of CNTs in the task of producing greater effective contact area.