Evaluating the anti-leukemia activity of avocatin B 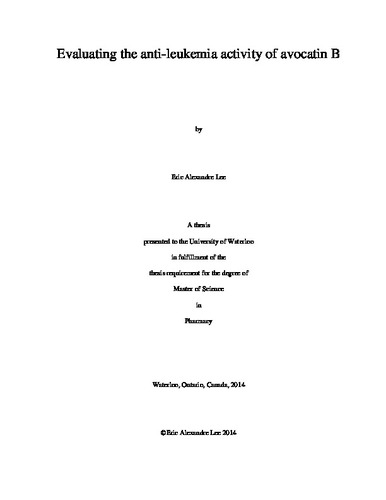 Acute myeloid leukemia (AML) is an aggressive malignant disease characterized by poor patient outcome and suboptimal front-line chemotherapy. To identify novel anti-AML compounds, a high-throughput screen of a natural products library (n=800) was performed. This screen was performed against the AML cell line (TEX), which has several properties of leukemia stem cells, the cells responsible for disease pathophysiology and patient relapse. Here, avocatin B was identified as a potent and novel anti-leukemia agent. Avocatin B, at concentrations as high as 20µM, had no effect on normal peripheral blood stem cell viability. In contrast, it induced death of primary AML cells with an EC50 of 1.5-5.0 µM. Selective toxicity towards a functionally defined subset of primitive leukemia cells was also demonstrated. Avocatin B (3µM) reduced clonogenic growth of AML progenitor cells with no effect on clonogenic growth of normal hematopoietic stem cells. Further, treatment of primary AML cells with avocatin B (3µM) diminished their ability to engraft into the bone marrow of pre-conditioned, NOD/SCID mice (t18=6.5; p<0.001). Together, these results confirm that avocatin B is a novel anti-AML agent with selective toxicity towards leukemia and leukemia stem cells. Mechanistically, avocatin B induced reactive oxygen species (ROS)-dependent leukemia cell apoptosis that was characterized by the release of mitochondrial proteins, cytochrome c and apoptosis inducing factor (AIF). Cytochrome c and AIF were detected in the cytosol of avocatin B treated TEX cells by flow cytometry. Avocatin B-induced apoptosis, as measured by the Annexin V/Propidium iodide assay, DNA fragmentation and PARP cleavage, and was abolished in the presence of anti-oxidants confirming the functional importance of ROS. Next, we further evaluated the role of mitochondria in avocatin B-induced apoptosis. First, we generated leukemia cells lacking mitochondria by successive culturing in media containing ethidium bromide. The drastic (>80%) reduction in mitochondria was confirmed by nonyl acridine orange staining and flow cytometry and a near absence of the mitochondria specific proteins ANT and ND1, as measured by Western blotting. Avocatin B’s activity was abolished in leukemia cells lacking mitochondria. Next, we tested avocatin B in cells engineered to lack CPT1, the enzyme that facilitates transport of 16-20 carbon lipids into mitochondria. Avocatin B’s activity was abolished in cells with reduced CPT1 expression (>70% as measured by qPCR analysis). To further confirm the importance of CPT1 in avocatin B-induced death, we chemically inhibited CPT1 with etomoxir. Avocatin B’s activity was blocked in the presence of etomoxir, further demonstrating that avocatin B accumulates in mitochondria. Since avocatin B is a lipid that targets mitochondria and that mitochondria can oxidize fatty acids for energy, we next assessed the impact of avocatin B on fatty acid oxidation, using the Seahorse Bioanalyzer. Avocatin B inhibited leukemia cell fatty acid oxidation (>40% reduction in oxygen consumption at 10µM) and this occurred at a 10-fold less concentration than etomoxir, the standard experimental molecule used to probe this pathway. Further, avocatin B treatment resulted in a 50% reduction in levels of NADPH, an important co-factor generated during fatty acid oxidation that participates in catabolic processes during cell proliferation. Additionally, we demonstrated that autophagy was functionally important for avocatin B induced leukemia cell death. We reported increased autophagic activity through confocal microscopy and Western Blotting of autophagy specific proteins LC3B, ATG7, SQSTM1(p62) and BNIP3L(Nix). To further confirm the importance of autophagy in avocatin B-induced death, we generated cells with reduced ATG7, the protein involved in autophagosome formation. Avocatin B’s activity was abolished in these cells demonstrating that autophagy was essential for avocatin B’s activity. These results show that avocatin B accumulates in mitochondria to inhibit fatty acid oxidation and reduce NADPH to result in ROS-mediated activation of autophagy and apoptosis in leukemia cells. This highlights a novel AML-therapeutic strategy by which mitochondria are targeted to impair cellular metabolism leading directly to AML cell death.